The previous official version of the Reliance SCADA/HMI system (version 4.7.1) was released on May 20, 2015. After almost a year, Reliance 4.7.2 is out with some new features and enhancements. The major changes are summarized below.

Converting visualization windows to a different resolution is easy

Project restoration at the end-user site

The Reliance system has been tested and is fully supported on Windows 10. This means that, beginning with Windows XP, all Windows versions are supported. 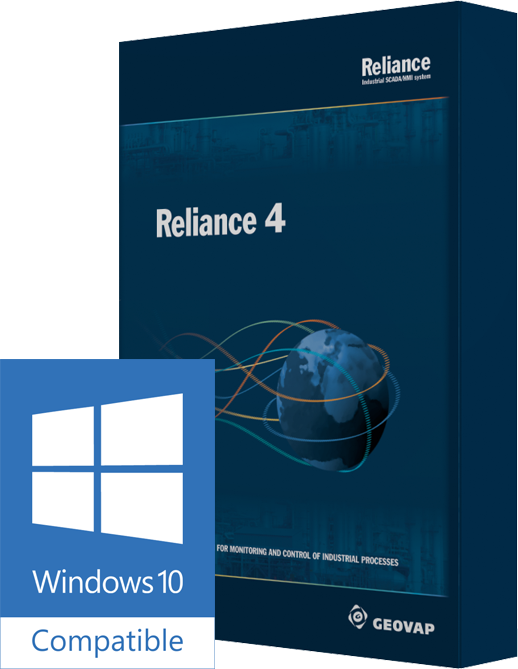 In Reliance 4.7.2, we have improved the way some files are stored on disk. Now, the number of writes is minimized. We have also added detecting an SSD at project startup. More details can be found in this technical article.

In previous releases, alarms/events were displayed in different colors depending on the alarms' status (red, yellow, white). You can now configure colors in order for alarms/events to be displayed according to their status and/or type. This can make the orientation in the alarm/event viewer much easier. 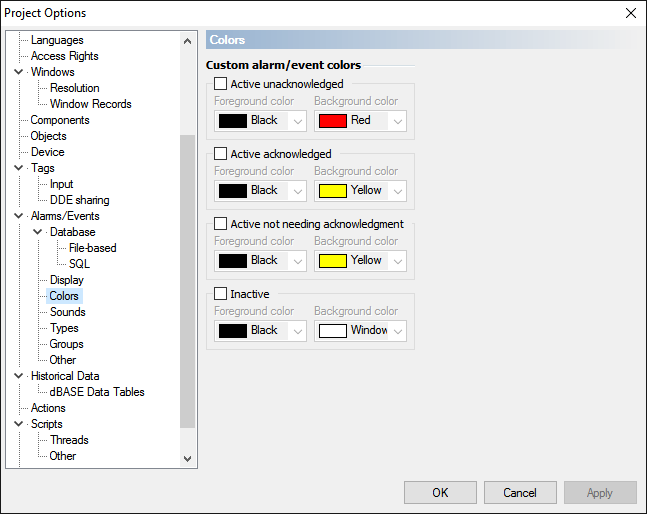 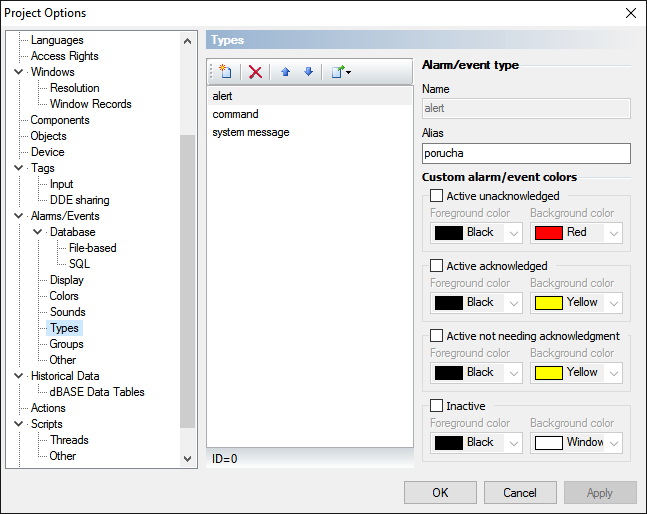 The Chart type property can now be configured at the level of trend series. This means you can combine, for example, a line chart and a bar chart in a single trend. 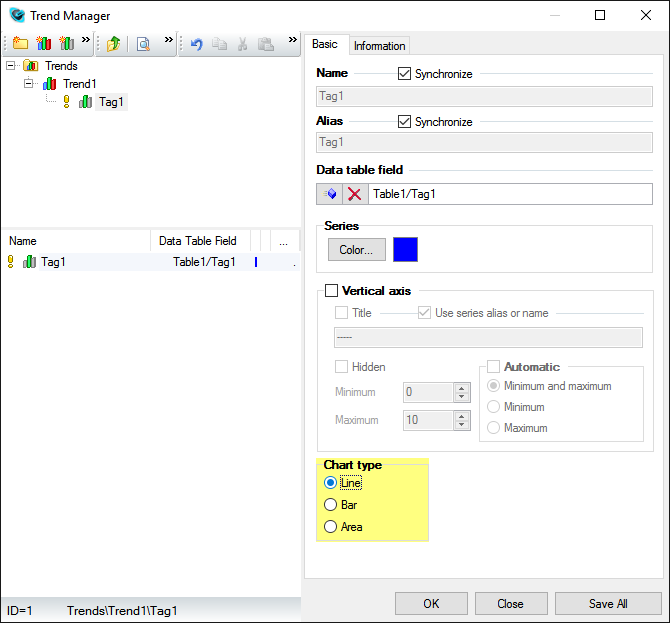 The list of special internal tags, which was introduced in version 4.7.1, now has the following new data types: 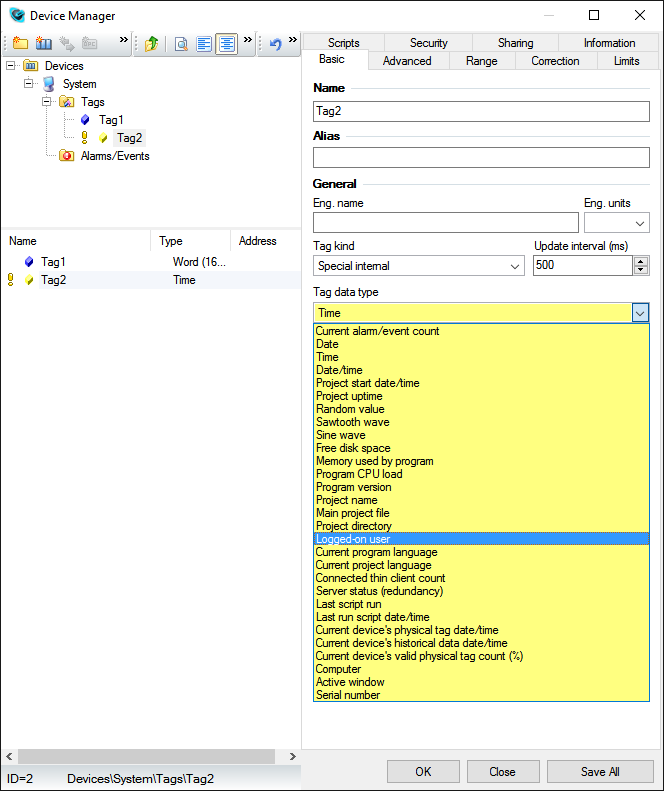 Performing bitwise operations directly in VBScript was neither easy nor fast and, what is more, could lead to hazardous conditions. As a result, the following functions have been introduced:


Another new function – RSys.ExecAction – allows performing a predefined action directly from scripts. The RSys.ExecActionAndWait function performs an action and waits for its completion (e.g., when it is necessary to wait until
a dialog box is confirmed).

For example, you can create a script that will retrieve the list of tags defined within a device (e.g., "BoilerRoom1"), loop through the list, and set the value of all tags whose names begin with, for example, "Param_" to, for example, 10. The functions are very general and, therefore, intended for widespread use.

In some cases, it is required to interconnect the Reliance 4 system and another information system to which project definition (i.e., the list of all objects, such as devices, tags, and alarms/events, with all their properties) is available. Therefore, the possibility to export the project to an SQL-based database so as to access the project in other information systems has been added to Reliance. If this option is active, the project is automatically exported at startup. 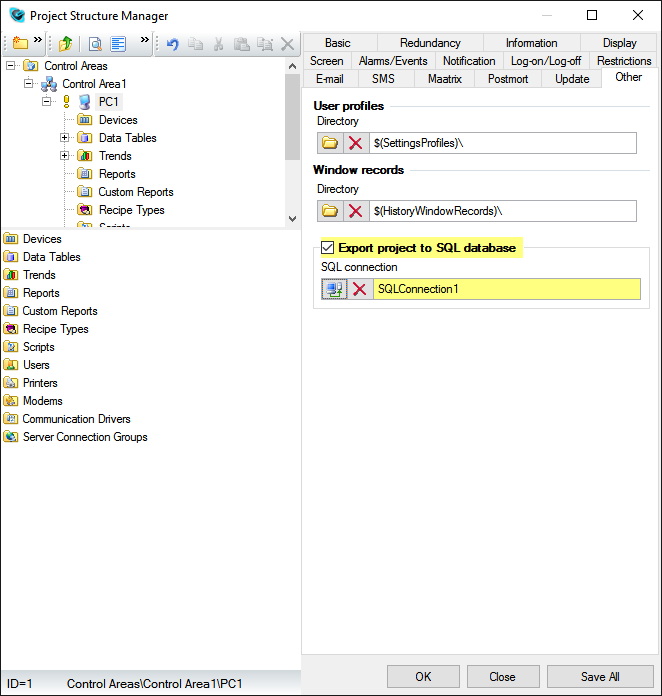 Converting visualization windows to a different resolution is easy

It may happen that your visualization project's windows will have to be converted to a different resolution. For this purpose,
a new wizard (Scale Windows and Components Wizard) is available in version 4.7.2. It allows you to proportionally change the size and properties of windows and components in a desired ratio (scale factor). The ratio can be entered either as resolutions (current and target) or as percentage. 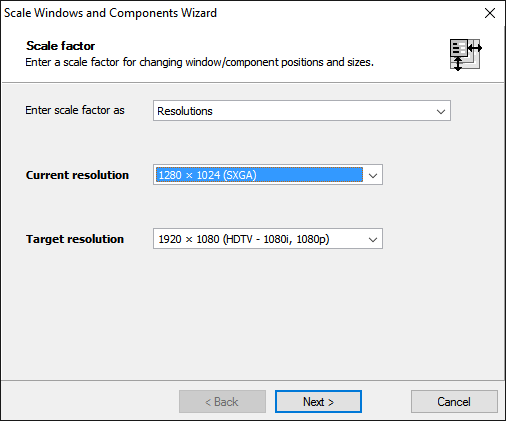 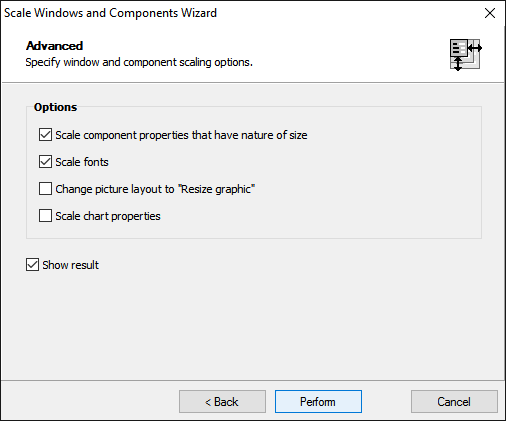 The Combo Box component is usually used to select an item from the predefined list. Previously, the item list was always static. Beginning with version 4.7.2, it can be specified by a tag of type Array of String, so it can change during runtime as needed. 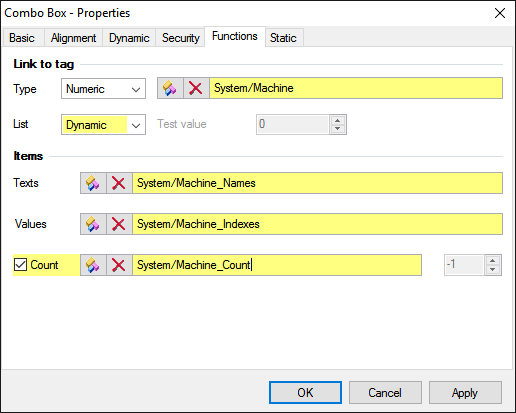 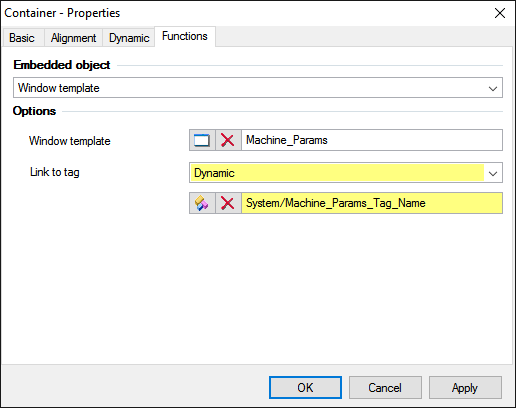 Reliance 4.7.2 has support for connecting to the Maatrix emergency communication service for the purpose of notifying users of alarms/events. For details, read this technical article.


Project restoration at the end-user site

A new method of project restoration – Restoration at end user – is now part of the Restore Project from Backup Wizard. This method is used in situations where a systems integrator is updating a project (at the end-user site) to which some changes have been made by the user (e.g., user passwords have been changed or new users have been added). If you choose this option, only files stored in the backup file will be restored except for the files defining users, trends, and reports.

Reliance 4.7.2 allows you to disable a number of confirmations so that they are no longer displayed.

If you wish to display them again, simply activate the Show option in the Environment Options dialog. 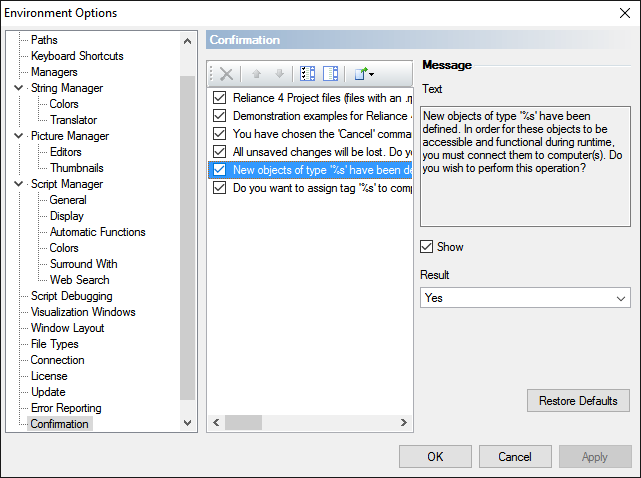 Reliance Smart Client now allows configuring trend properties. The settings are saved to a user profile on the server. 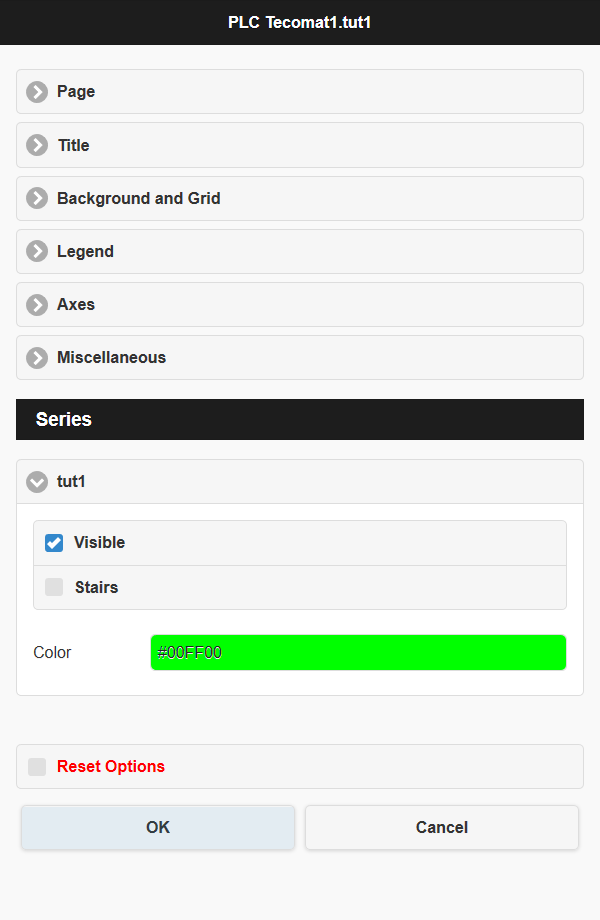 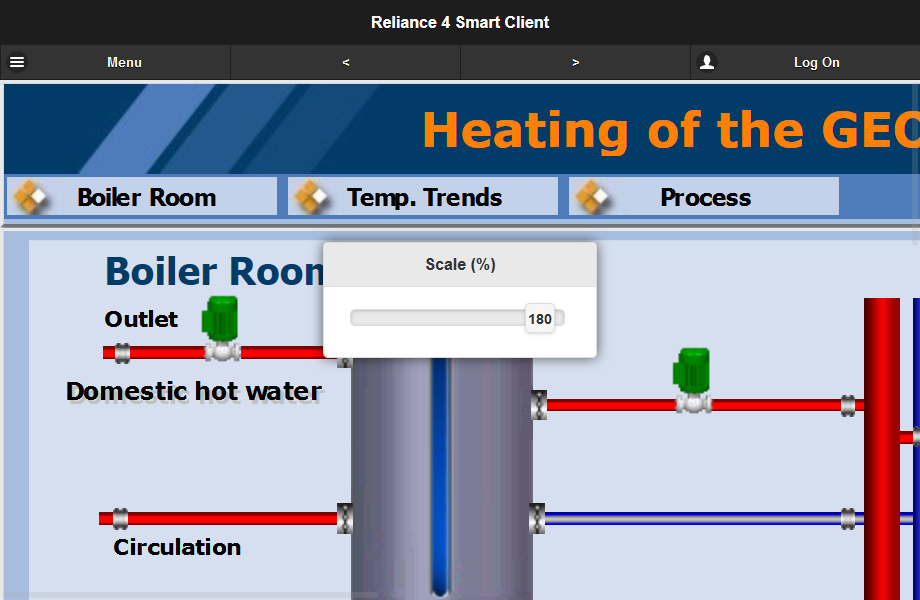 The Pipe, Scale, Clock components and vector components are now displayed using inline SVG. This optimizes the amount of transferred data and there is no distortion when scaling. 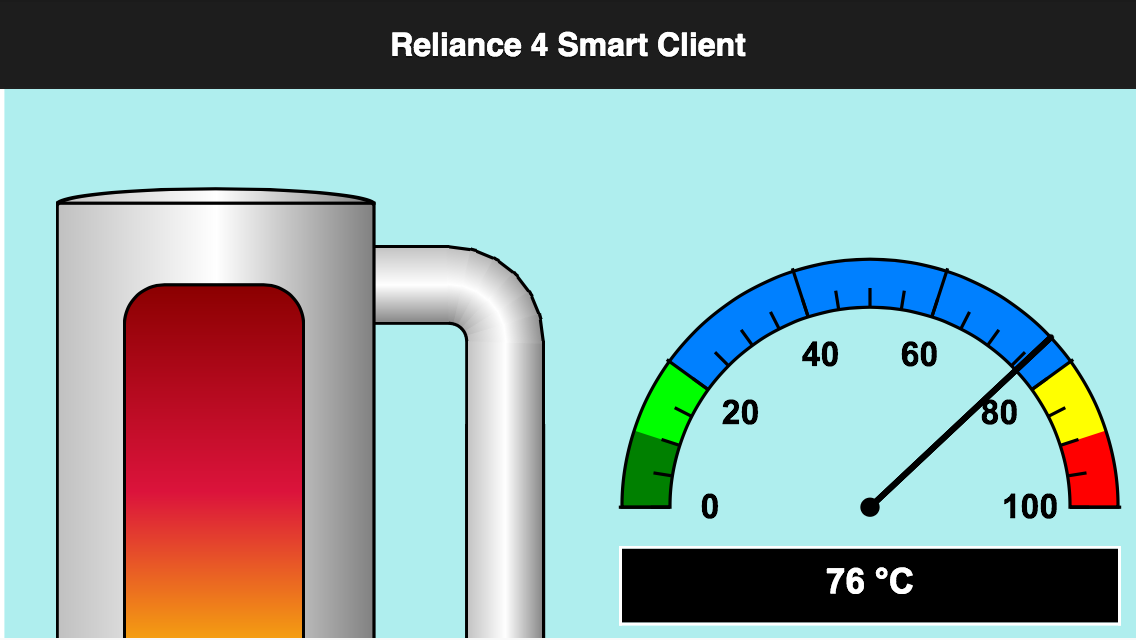 The above are only selected new features. The full change log is available on this page.