Reliance 4.9.0, which has just been released, is this year's second official version of the system. Once again, it includes many new features and enhancements. The major ones are summarized in this article.

Updating a project via the Web server

Speed, reliability, and high availability are essential prerequisites for operating a SCADA system. They were also high on the list of priorities when developing Reliance 4.9.0. It results in the following overall improvements:

Accessing tag bits, array elements, array element bits, etc., in versions prior to version 4.9.0 was problematic (difficult for large-scale projects, complicated when writing a value). Therefore, version 4.9.0 provides a new tag kind named Derived. A tag's value is derived from the value of the source tag (or multiple tags). You can create derived tags of different types: 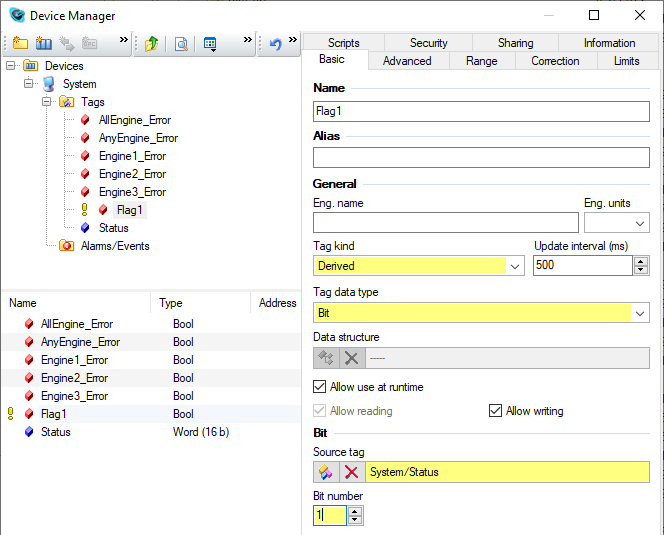 Derived tags of type Logical product and Logical sum have multiple source tags and the value of a derived tag depends on the result of the respective logical operation. 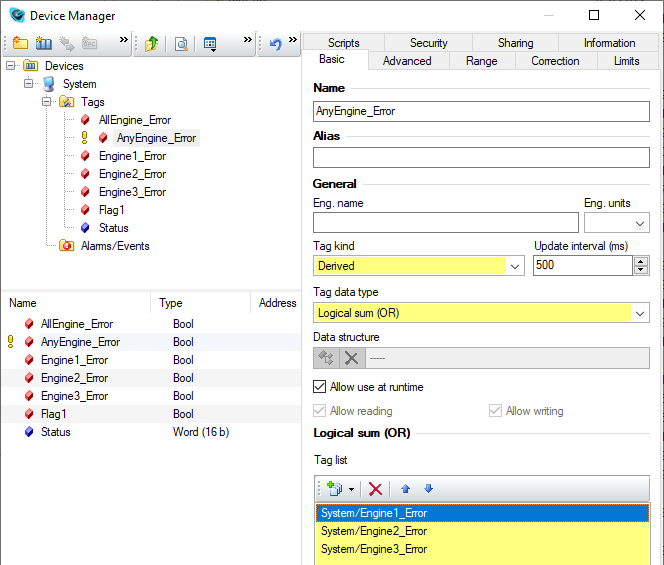 Despite the necessity of introducing new tags into a project, resolving this issue using derived tags is advantageous for the following reasons:


1. Tags are objects with which you can work excellently in the entire Reliance system. For example, a bit's value will be easily accessible in any location where the link to the tag can be specified, in the thin clients, in scripts, in API, etc. So, working with such an object is standard.


2. Derived tags are administered centrally, i.e., from one location, which is the Device Manager. If, during the development of an application, it turns out that a tag of type Bit, which is used in many places in the project, should work with a different bit number or a different source tag, it is easy and fast to make such a change.


In future versions, the list of types of derived tags will expand, as was the case after the introduction of special internal tags in version 4.7.2.


The setup is easy. In the Project Options dialog, one or more Active Directory servers can be defined. 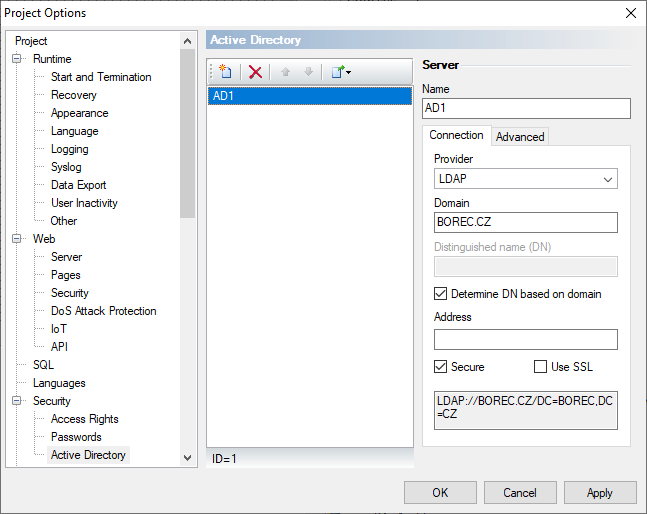 In the User Manager, a user and a user name for logging on to Reliance must be defined. Next, set the Authentication property to Active Directory and select a server defined via the Project Options dialog. A user name that corresponds to the user object in Active Directory can also be defined.

This user is now authenticated via Active Directory.


In addition, Reliance allows continuously adopting the user's attributes (email, phone number) from Active Directory servers. The servers intended for synchronization can be selected for a computer in the Project Structure Manager. 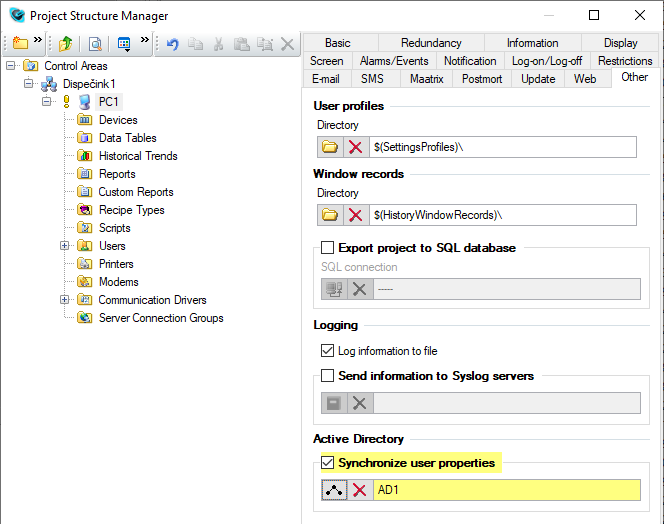 An alarm is used to notify operators in the event of a failure in communication with the Active Directory server.

Syslog is a protocol for message logging over a network. Log records collected from one or more computers can be used by network administrators and security auditors as a source of information for system analysis and debugging. The Reliance system logs the records to files. Beginning with version 4.9.0, the system also allows sending selected types of log records to selected syslog servers.


The setup is easy. In the Project Options dialog, one or more syslog servers can be defined. Configure the syslog server's properties (Address, Port, Protocol, Message format) and activate the types of log records that are to be sent to the syslog server. 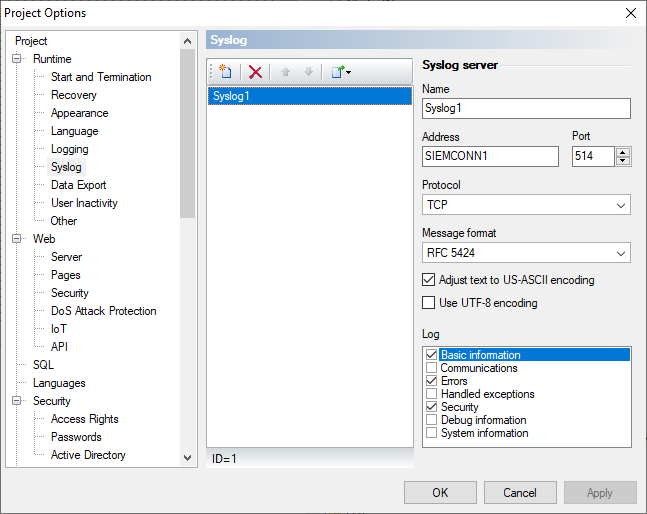 To configure the settings that determine whether and to which servers the computer is to send the log records, go to the computer properties' Other page in the Project Structure Manager. 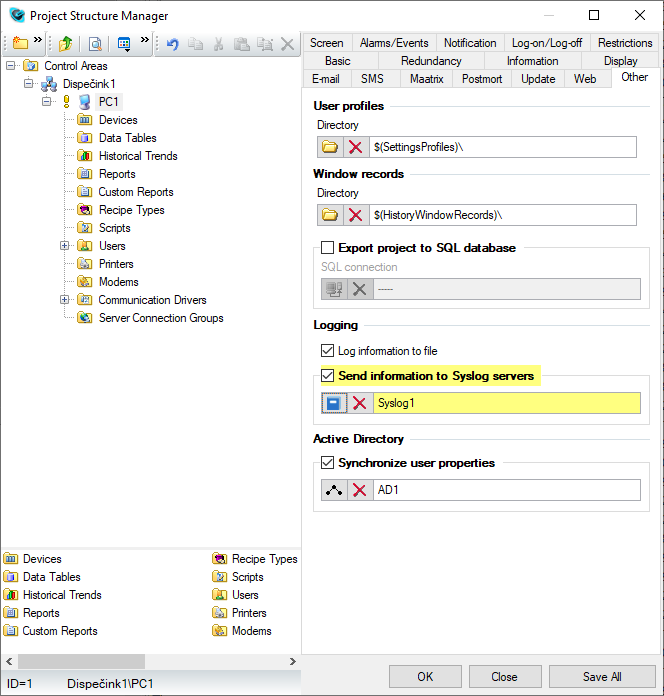 As syslog is often used for collecting security-related events, a separate category named Security has been introduced for logging such events. This allows only these events' log records to be sent to syslog servers.

Data server redundancy (or redundancy of type server–server) has been part of Reliance since version 4.6.0. The aim of this feature is to allow the project's most important computers to operate in hot standby mode. In older versions (up to 4.8.1), you could only define one secondary server for each primary server. Now, the number of secondary servers is not limited and their priority can be set. 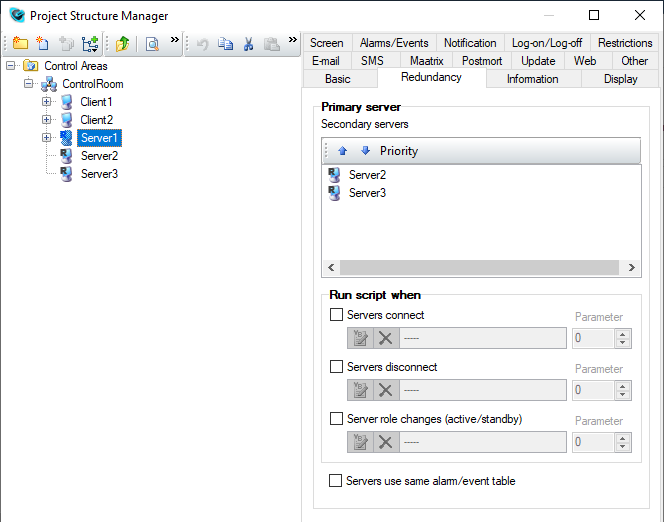 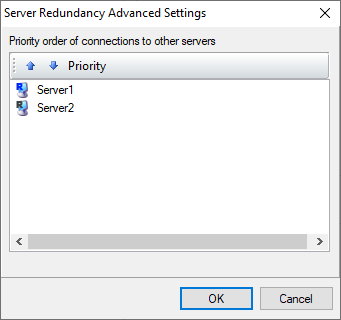 Updating a project via the Web server

Reliance's project updating allows you to have the same project version on all computers. Until now, this function has been based on file system utilization and file sharing within the computer network. However, you may find this way of updating a project unreliable when comparing project files and ineffective in terms of the amount of data transferred and the speed of the transfer. In addition, the SMB protocol, which provides file sharing over a Windows network, has a number of security issues and is generally recommended to be disabled on computers running a SCADA system.


The new method of updating a project does not suffer from these drawbacks. It is based on exchanging data with the Web server, which is part of Reliance's data servers (Reliance Server and Reliance Control Server) and which keeps the project up to date on all SCADA-defined computers that request it.

When being updated, the files are compared by content and the data is compressed and encrypted. For this reason, communication is efficient and secure. As before, projects are updated prior to their startup. However, if the Web server is used for the update process, changes are continuously checked even after project startup. If – during the continuous checking – a different project version is detected on the server, the appropriate special internal tag value is set on the client computer. The application will react to such a change to this tag's value according to the systems integrator's decision (e.g., by activating a visualization window that will display information about a new available version and a button for restarting the project). 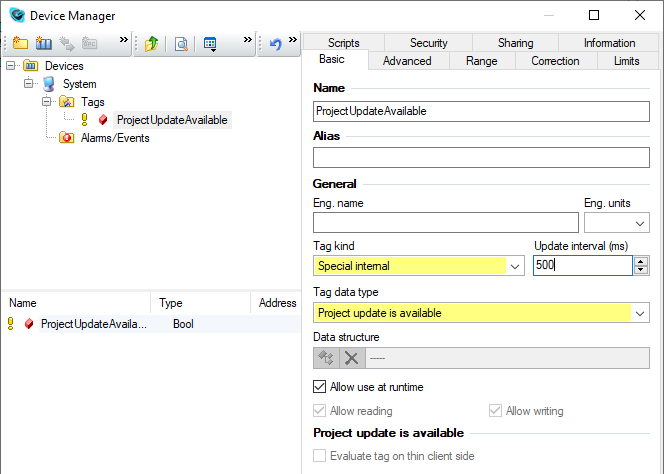 Due to many requests from our customers, we have added the following native communication drivers for specific PLC types to Reliance 4.9.0: 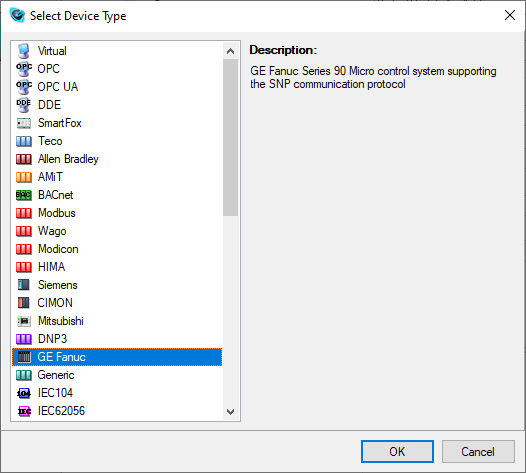 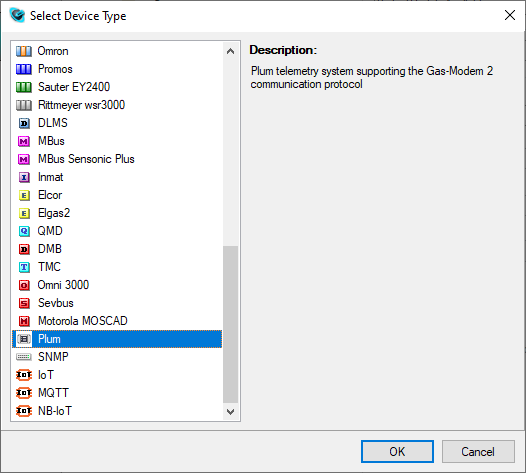 A Web page embedded into a visualization window through an Internet Explorer component allows running a Reliance project-defined script. This can be done by simply calling the following JavaScript code:

Option Explicit
dim Data
if RScr.GetCurrentScriptDataEx(Data) then
if Data.CustomStrPar1 = "BR1" Then
RSys.ActivateWindow "BoilerRoom1"
end if
end if

It can be used as follows: Clicking on a particular control within the Web page will activate the respective visualization window. Skript1 must have its Enable running from embedded Web browser option active. 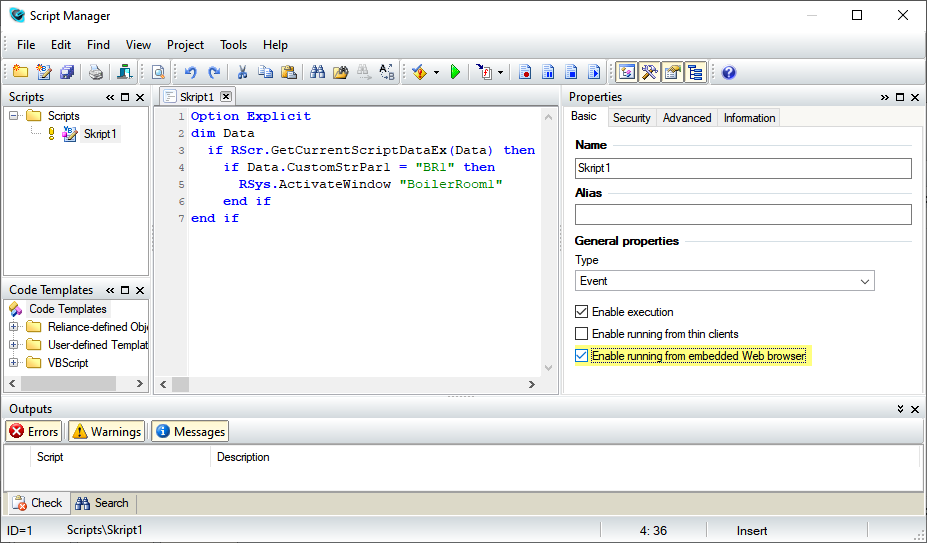 The Show Report command has been added to components' standard popup menu. The command is intended for opening the report viewer and displaying values of a tag to which a component is linked. This is equivalent to the Show Trend command. The only difference is that the data is displayed as a table. 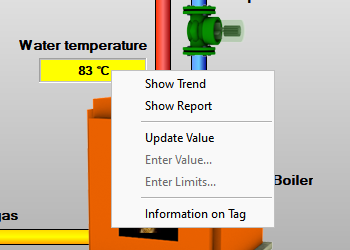 In addition to this command, the corresponding Show tag report action type is now also part of the system. 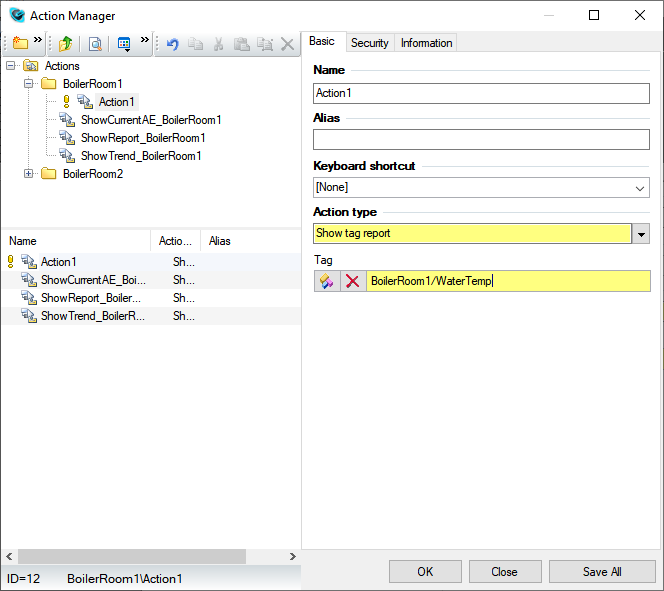 Quick filtering is of great help when working with an object list in managers and the alarm/event viewers at runtime. In version 4.9.0, you will find the following improvements:

At runtime, you can now use the following commands for changing the scale of visualization windows:

The scale can also be changed by scrolling the mouse wheel while pressing the Ctrl key or by choosing the commands from the Window menu.

At the moment, this feature is only available to normal windows. For dialog windows and windows of type tray (panel), it will be added in a future version. We are also planning to implement the possibility to preset the scale on individual computers and thus adjust the display size to a device with a different screen resolution.


Some other new features and enhancements have already been published on Twitter, Facebook, and LinkedIn and there are more to come.