We have recently added a new on-line visualization application to the Reliance Demo Applications section. This application is designed to display real-time data of a single-family home. It shows how easy and clear it is to use the Reliance system for the visualization and control of today's modern systems installed in single-family homes, apartment housing, or production and industrial buildings. Thanks to Reliance's modern features and the Reliance 4 Smart Client module, this application can be run not only on a PC but also on a smartphone and tablet.

In addition to creating the Building automation demo, we have updated the Reliance demo applications page. Now, this Web page has a new, modern design with big and well-arranged buttons for running the applications. Further, it is now possible to run the demos on
a smartphone using a QR code reader. This design change has also affected the appearance of the Web pages on which the demo applications are described. 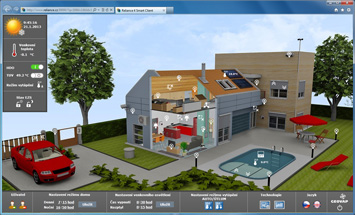