We met another potential distributor of Reliance at the International fair Hannover Messe 2004. Actron AB, a Swedish company from Goteborg, showed interest in becoming an exclusive distributor of our system in Sweden and Norway.


Actron AB is a longtime distributor of automation technology on the Swedish market. Apart from Hitachi and Exor products, Actron produces and distributes a unique system called PassCheck, which is used for the automatic counting of passing people using contactless sensors. Shopping centers (e.g. IKEA), banks and other institutions use this system in order to monitor the number of customers visiting in different times of the day. The PassCheck system is very popular all around the world.


Initially we visited and discussed conditions of distribution with Actron in Sweden. Then at the end of June and beginning of July, specialists from Actron undertook a training in Reliance at the GEOVAP Training Center. The distribution contract has been already signed and Actron introduced Reliance to its customers for the first time at Euro Expo in Sundsvall in Sweden in August 2004. 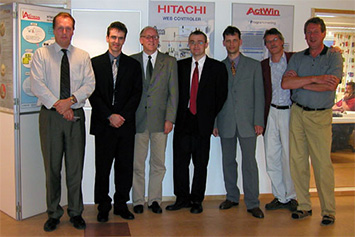