Scripts do not work in the thin clients

Reliance's thin clients (Web Client, Smart Client) do not support executing scripts at the client side. This is due to the fact that the thin clients have no core that could execute scripts. To write scripts, Reliance uses the VBScript language. In VBScript, scripts are processed by Windows Script Host. VBScript and Windows Script Host are Microsoft Windows–based technologies. On the contrary, the thin clients are basically platform-independent. Web Client is a Java-based module while Smart Client is based on HTML5 and JavaScript. These platforms do not allow running VBScript.

The easiest and recommended solution is to use actions. Actions are intended for executing predefined commands. Displaying a trend or report, activating a visualization window or the Log On User dialog are examples of actions. There are a lot of situations where actions can be used instead of scripts. The thin clients have support for most actions.


If using actions does not suffice (e.g., some other logic is required), it is possible to take advantage of the fact that the thin clients can execute scripts at the server side. For example, if a Button component placed in the visualization window is configured to run a script by clicking the mouse, the script will be triggered on the server. In cases when a script does not interact with the user interface, executing scripts at the server side is a commonly used method. An example of such a situation is a script that calculates tag values or a script that generates a report as a PDF file and sends it by email. However, scripts that do interact with the user interface should not be executed this way. If a script, for example, activates a window or the Log On User dialog invoked by clicking on a button in a thin client, it does it at the server side, which is not desirable.


To run scripts from a thin client at the server side, the Enable running from thin clients option must be activated in the Script Manager. 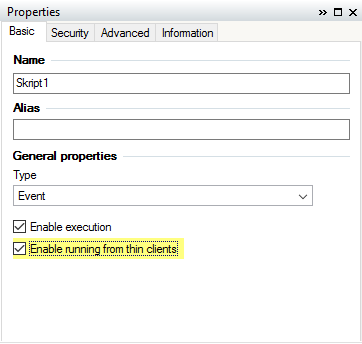