Navigation: Success stories > Transportation > Visualization and control of the Imperial Funicular in the spa town of Carlsbad

At the beginning of the 20th century, three funicular railroads were put into operation in the spa town of Carlsbad. They have since been a traditional and favorite means of public transportation in the town. They are inherent in the town and used by a large number of visitors, especially tourists and spa guests. Today, only two of the funiculars – Imperial and Diana – are still in operation. The third one was closed in 1959.


The Imperial Funicular has undergone several renovations over the years. The first one (1955–1957) was extensive and included the installation of a new crane motor by Skoda Pilsen. In 1961, the original wooden cars were replaced with new metal ones by Tatra Smichov. In 1983, the funicular railroad changed again, with the tunnel and the station buildings being the only untouched parts. In 1995, the drive control section was equipped with a 56kW DC converter. At the same time, a system consisting of a SAIA PLC and a PC equipped with the ProConT monitoring system was implemented to control the funicular. The Imperial Funicular became the first funicular in Czechia controlled by a programmable logic controller with commands entered by the operator via a computer monitor. The last renovation took place in 2017. It consisted of replacing the original SAIA processor module with a state-of-the-art model and installing the Reliance SCADA/HMI system for monitoring purposes. 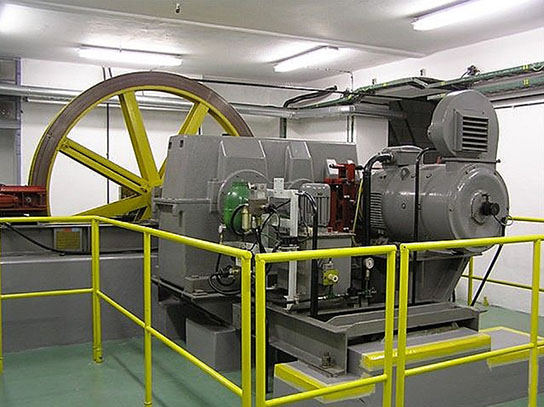 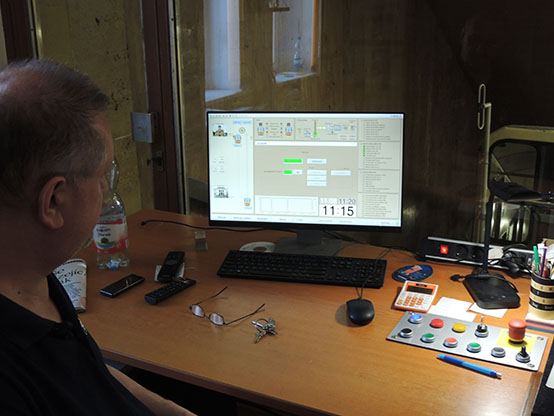 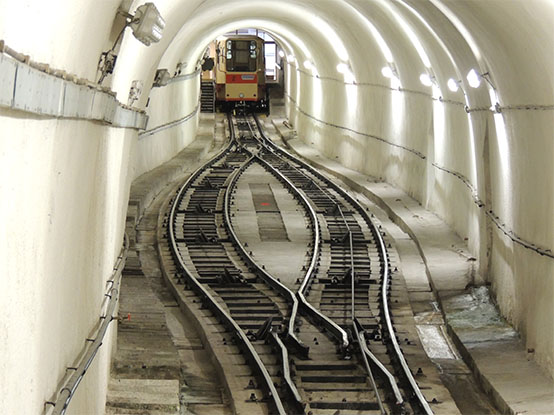 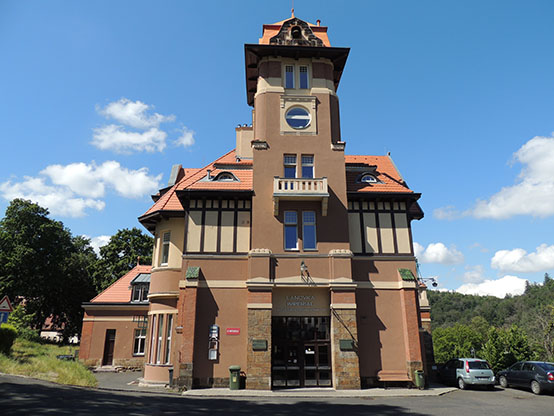 The Imperial Funicular is a funicular railroad with permanently attached cars. The entire railroad leads through a tunnel. It is a two-rail funicular with the so-called Abt Switch in the middle of the track. It transports people between Theatre Square (Divadelni namesti) and Helen's Yard (Helenin dvur) near the Hotel Imperial. Some other technical parameters: length – 127 meters, vertical distance – 54 meters, travel time – 58 seconds. It is Czechia's steepest funicular with a maximum grade of 49.5 %.


The Imperial Funicular is nicknamed The Carlsbad Metro and is part of Carlsbad's public transportation system. It operates all year round. At peak times, it departs every 15 minutes with a bus connection (Line 13) from the top station.

The SAIA PCD2 PLC and the computer equipped with the Reliance SCADA/HMI system (Reliance Control Server) allow operating the funicular in two modes – automatic and manual. Reliance's overview screen enables monitoring the operating status of the funicular. It is also designed to quickly detect a possible error. The Reliance project includes the schedule according to which the funicular operates and which counts down the time to the next departure. In addition, the Reliance SCADA system records regular daily, weekly, monthly, and annual inspections as required by technical and legal operation-safety regulations. These records are available – via Reliance Web Client – to the head of the funicular center. 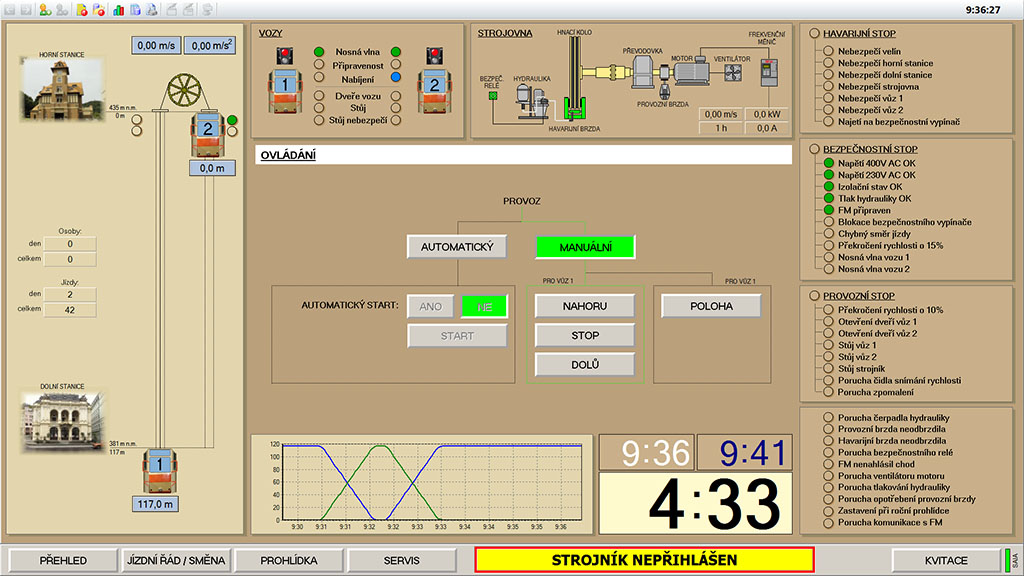 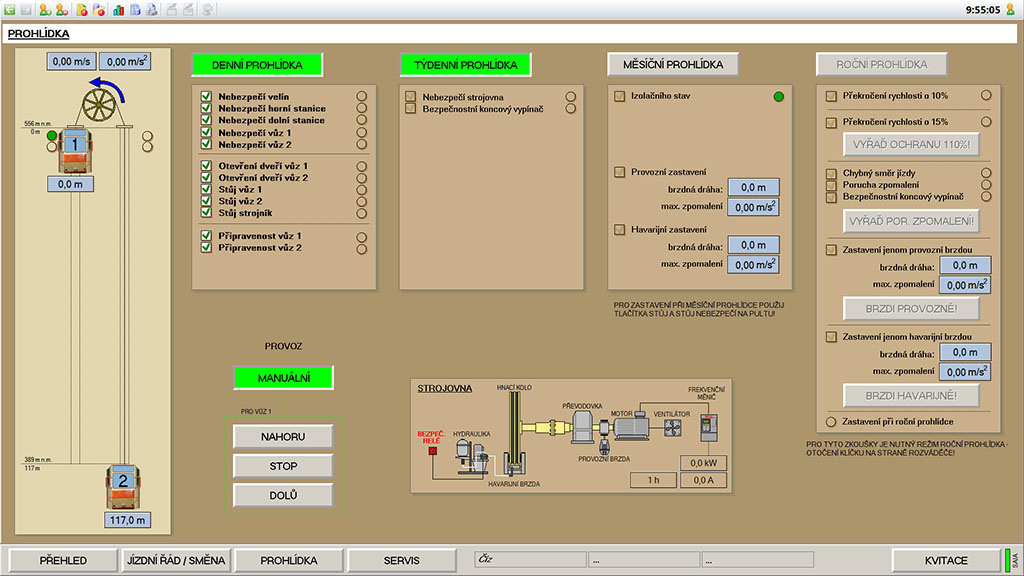 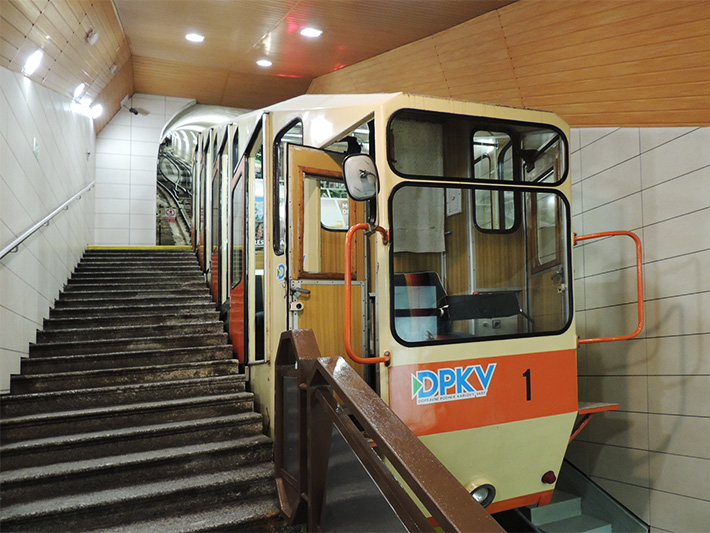