Navigation: Success Stories > Production Lines > Visualization and control of the production line used for the manufacture of soundproofing materials at VEST-IZOL

The VEST-IZOL company is a world-famous producer of soundproofing materials used in the automotive industry. In 1995, VEST-IZOL was bought by the German company STANKIEWICZ GmbH, which belongs to the PHOENIX A.G. transnational company. Since the beginning of 1995 with 18 employees, the company has grown to more than 350 professionals in the field of the automotive industry.


VEST-IZOL is a supplier of soundproofing products for middle and luxury class vehicles including sports and commercial vehicles for AUDI, BMV, VW, Skoda Auto, Seat, MAN, Scania, Opel, Mercedes-Benz, Jaguar, Nissan, and many other brands.


VEST-IZOL's soundproofing products have become very popular among consumers – they are sold in Europe, Asia, North and South America.


A new system for the visualization and control of the line used for the production of soundproofing materials was put into service at the end of 2001. The first implementation of the Reliance SCADA system provided control of the process oil levels in two oil tanks. Through the years, the entire SCADA system was extended and upgraded with new components, subsystems, and technologies. In 2004 a brand new extensive control system was installed to provide control and monitoring of most processes and states including power, gas, and heat consumption.


For data transfer, the following communication types are now used

According to the needs of individual users (from service engineers to top management), the system can be divided into the following six parts:

Reliance's visualization windows allow displaying, for example, production lines or a production machine. Each window provides display and control of many parameters (e.g., temperature, pressure, level, weight). Reliance SCADA can also monitor and control chemical dosing used during the production process. All these parameters can be displayed via trends, reports, and custom reports. 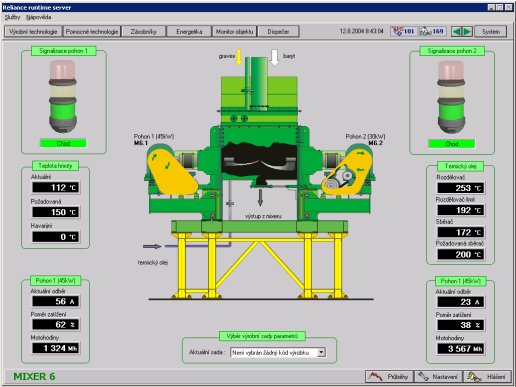 Visualization of the blending machine

Visualization of the process-oil weighing machine

This section was created in order to be able to monitor the nonproductive systems, which are very important for the production process. It provides monitoring of:

Visualization of the water cooling system

The SCADA system was also extended to control supplies of raw materials stored in the tanks. Reliance provides control of: 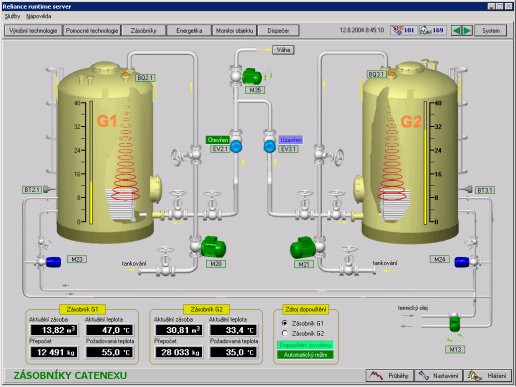 Visualization of the tanks with processing oil 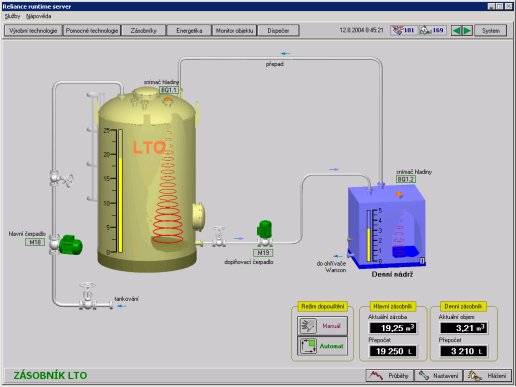 Visualization of the tank with light fuel oil 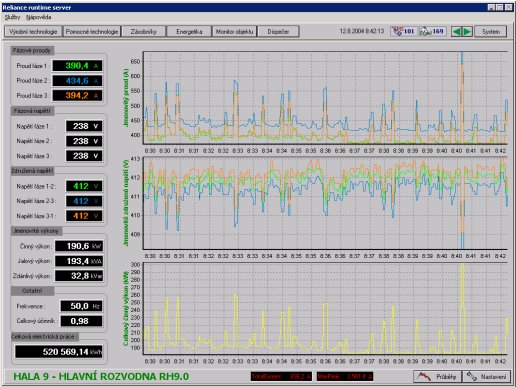 Visualization of the trends displaying the electrical substation's power consumption

The control system provides control of the factory and administration buildings. The Reliance SCADA system is used to monitor:

Reliance also provides control of the SCADA system service features. For example, the system can display a window with communication stations. Another feature is SMS Operator, which automatically sends information via text and email messages to clients' cell phones or email addresses. These messages are sent using the predefined settings in the Reliance system. They are are used to warn the personnel of any emergency condition or leakage of raw materials. 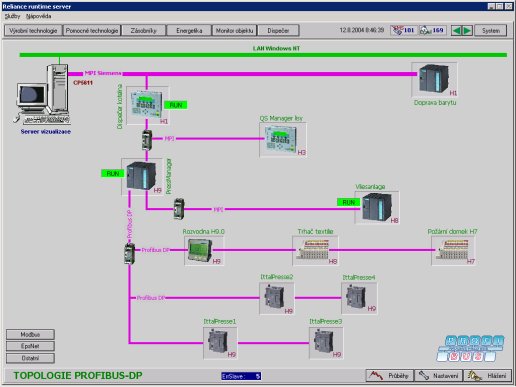 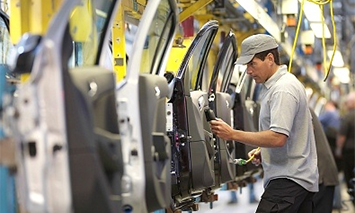