Visualization and control of auxiliary operations at Melnik Power Station

Melnik Power Station belongs to the CEZ Group. This power station is situated near the city of Prague, about 15 kilometers past the junction of the rivers Labe and Vltava. It was built from late 1960s to early 1970s. In the past, coal was carried from West and North Bohemian coal mines to the power station. Between 2001 and 2004, auxiliary operations at Melnik Power Station were reconstructed by the SUMO company.

At the power station, a new system for the control of the auxiliary operations was installed. The implementation of the control system was split into the following parts:

The control system consists of seven Allen-Bradley SLC 5/04 control processors used for the control of the HTO (management of the fuel oils) technological entities. The processors of EME inner coal handling and ZAU propellers are connected with one another via the DH+ communication interface. The DH+ communication interface is redundantly connected into the backbone network via an optical line.


The deicing tunnels are connected to the network via the DH485 communicaton interface. The entire control network consists of eight independent PLC devices (Allen-Bradley SLC 5/04).


ZAT-E, the existing control system at the power station, is used for the control of EME inner coal handling. The ZAT-E control system is connected via a Profibus-FMS device with the SCADA/HMI system as a DDE/OPC device.


Most workplaces allow remote control. This means that a service engineer can connect to any workplace via telephone modem connection and configure all necessary parameters. For the purpose of visualization, the Reliance SCADA/HMI system is used. The number of data points used in the visualization project reaches 7,000. 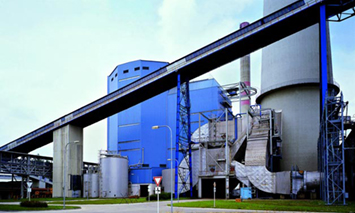