Navigation: Success Stories > Other > Securing the process of nuclear fusion and the safety of high power laser personnel

A tokamak is a device using a magnetic field to confine a plasma in the shape of a torus (quotation from Wikipedia). Using a tokamak, scientists are trying to achieve controlled nuclear fusion, which presents a practically inexhaustible and environment-friendly source of energy for future generations. During nuclear fusion, atomic nuclei join together while releasing large amounts of energy required by elements to hold their particles together. It is the same process as in stars.

The new safety system is designed to protect the tokamak's and Thomson scattering labs' staff from coming in direct contact (intentionally or by accident) with a laser beam.


If experiments are made at a level higher than the class 1 laser, the staff protection system must provide reliable shutdown or block the laser when entering the laser radiation area. The control system evaluates real-time situations by monitoring sensors inside the hazardous areas and according to data received from control components (local control panel, switches, key components). Therefore, the system's behavior depends not only on the sensors' current states and values, but also on the current status of the experiment in progress.


Based on the above information, the control system blocks the laser device, closes the screen door leading to the tokamak hall, and controls the warning lights located in front of the door. Also, the system allows the operators to visualize the whole process both locally and remotely on the control room's PC.


The complete control system consists of one Tecomat Foxtrot central unit, which is used to acquire and gather process data and control the staff protection system using defined algorithms. To provide comfortable visualization, the Reliance 4 SCADA/HMI system was employed.


To control and monitor the hazardous area, two control PCs were installed. Process states can also be monitored from the workplace fitted with the Reliance system.


In order to allow the operators to intuitively and comfortably control the whole system even when at risk, precise graphic design was crucial for creating visualization screens.


The staff protection system was successfully presented at the Symposium on Fusion Technology 2010 in Porto, Portugal. Also, it was published in the prestigious journal Fusion Engineering and Design. 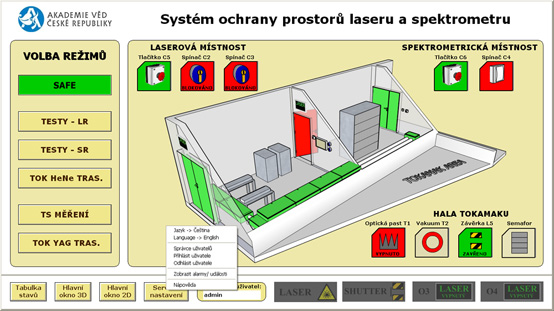 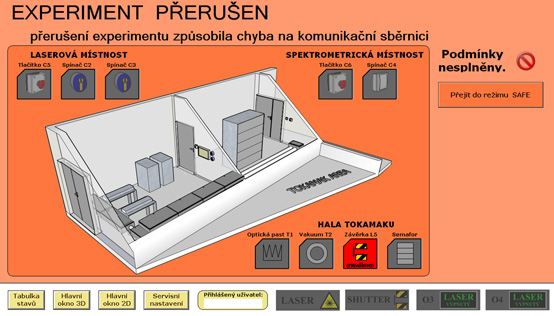 A visualization window indicating an interruption of the experiment 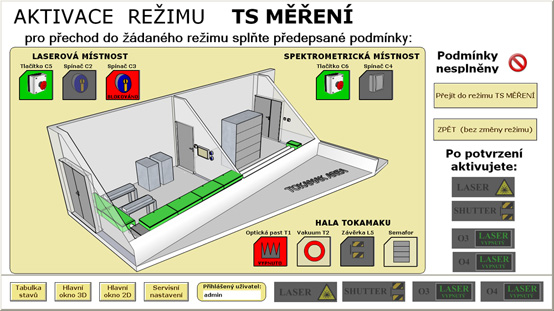 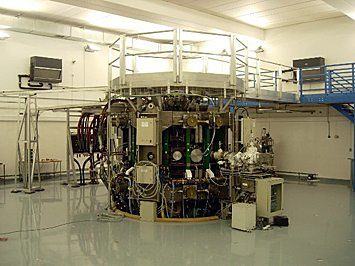