Visualization and control of Meydan Retail Centre in Dubai

Teco is a Czech company with many years of experience in the development and production of control systems for machines, processes, buildings, and transportation. It is one of the leading manufacturers of programmable logic controllers.


In 2019, the company's Middle East office implemented a system for the control and visualization of Meydan Retail Centre in Dubai. It is a complex project that includes nearly all automation solutions that you can find in commercial buildings like malls.

A fan coil unit (FCU) is a device used to control the temperature in a building. It is part of an HVAC system and consists of a heat exchanger and a fan.


In the retail center, there are 70 fan coil units located in different places. For each place, a different temperature is required. Using a simple interface created with the Reliance SCADA system, the user can control any FCU in the center (e.g., set its mode and speed) and set the temperature when the FCU is in the automatic mode. In addition, all the FCUs can be monitored at any time by reading their mode and speed status values.


Communication between the FCU system and the PLCs is based on BACnet/IP.

There are many lights in the retail center. The user can monitor their status on a cell phone, tablet, or laptop.


Communication between the lighting controller and the PLCs is based on BACnet.

A smoke damper is a passive fire protection device installed in air-conditioning ducts or smoke barriers (walls, floors, doors). It is designed to prevent the spread of smoke from the space of fire origin to other spaces in the same building.


Damper status and fan status can be monitored at the same time.

In the retail center, there are 5 fresh air handling units (FAHU). The user can monitor temperature and humidity values, compressor status, and filter status. Also, the status of each damper and fan in each of the air handling units can be controlled.

A water system is another part of the project. The user can monitor the status of irrigation pumps, booster pumps, drainage pumps, and water tanks.

The user can monitor all circuit-breakers in the building's electrical system, including voltage, current, and frequency values.

The retail center's fire alarm systems keep the building safe from fire. The user can monitor their status and, in the event of a fire, put it out using:


The generator is one of the most important parts of the building. Therefore, its status must be monitored.


Communication between the generator controller and the PLCs is based on Modbus RTU.

The retail center is equipped with two elevators. The operation of an elevator may sometimes be dangerous, so the alarm status of the two elevators and the status of power supplies are monitored.

An uninterruptible power supply (UPS) is an important power source for any building. Therefore, it is essential to monitor its status. This building is no exception.

The power status of some other systems installed within the retail center is also monitored. They are as follows: 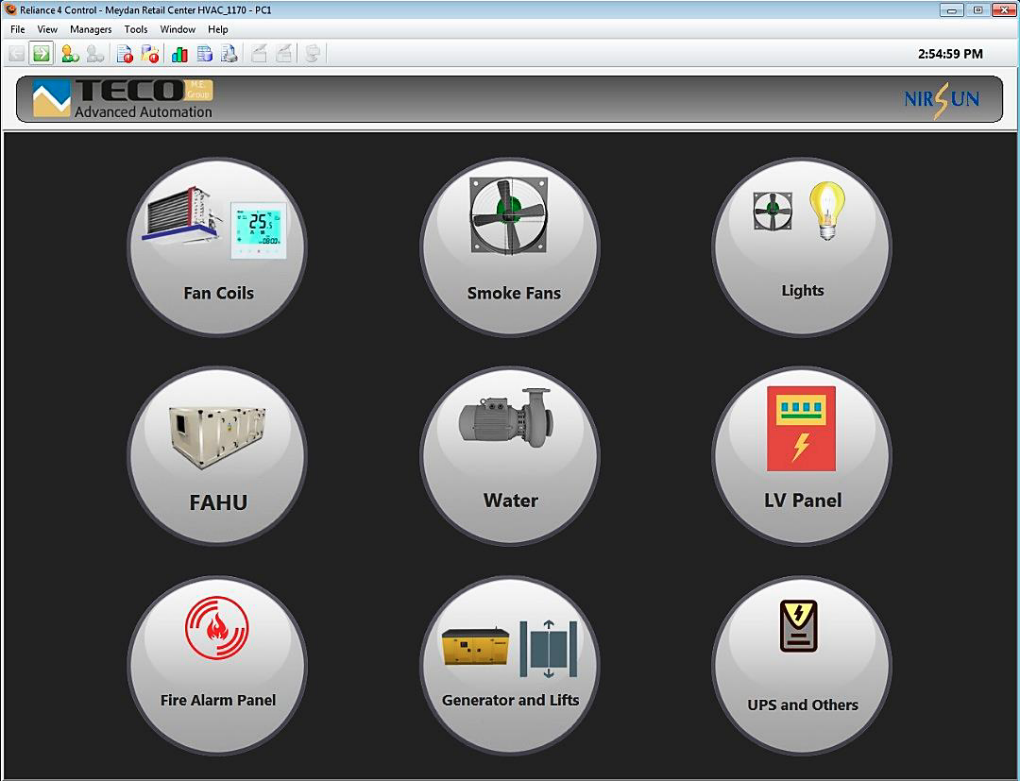 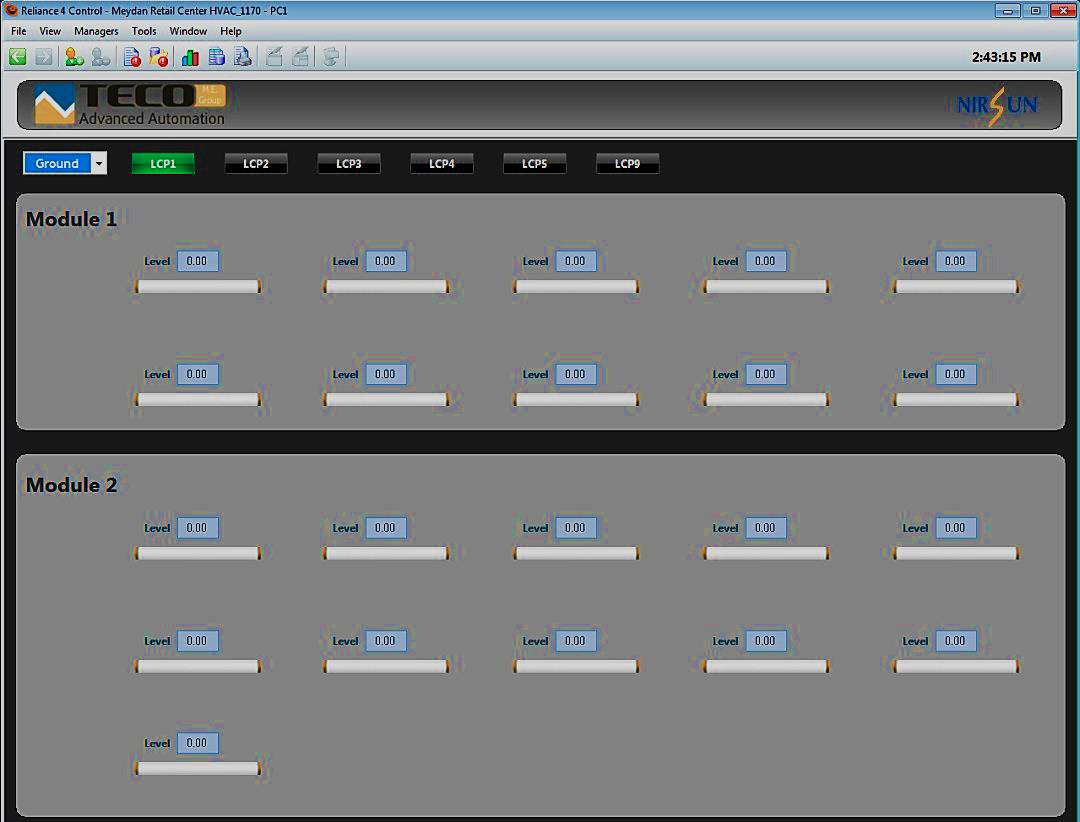 Visualization of the retail center's lights 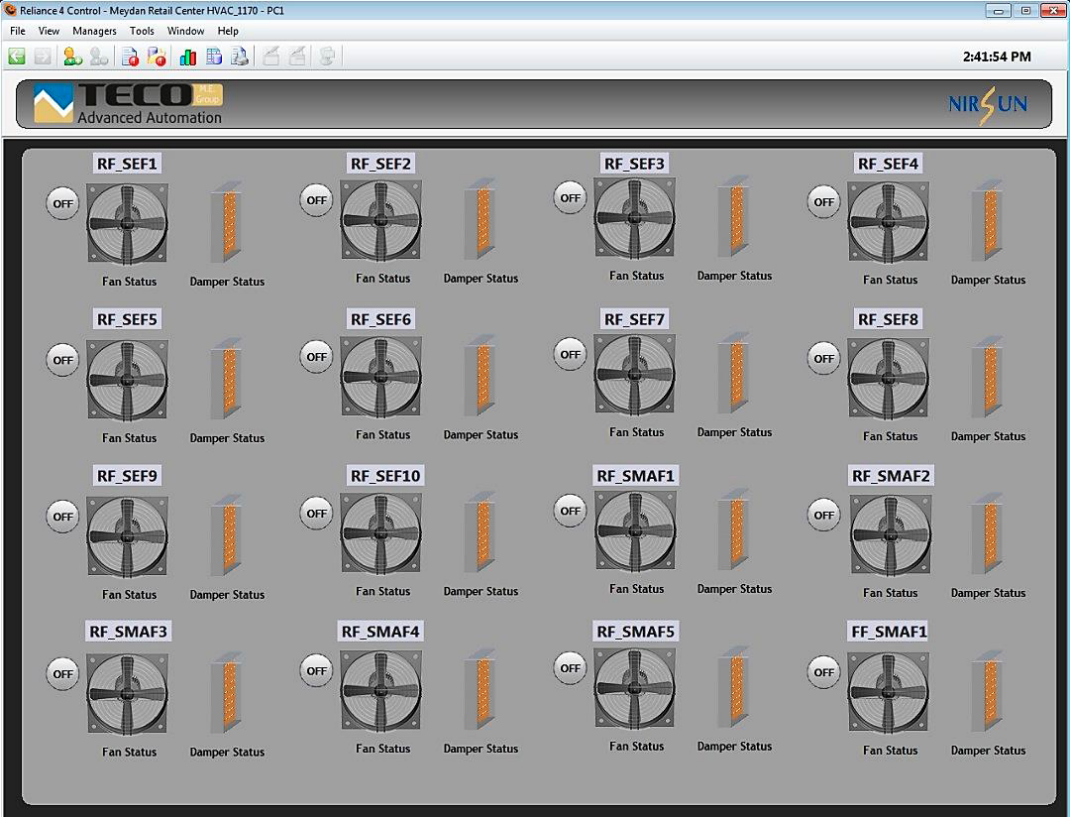 Visualization of the smoke dampers 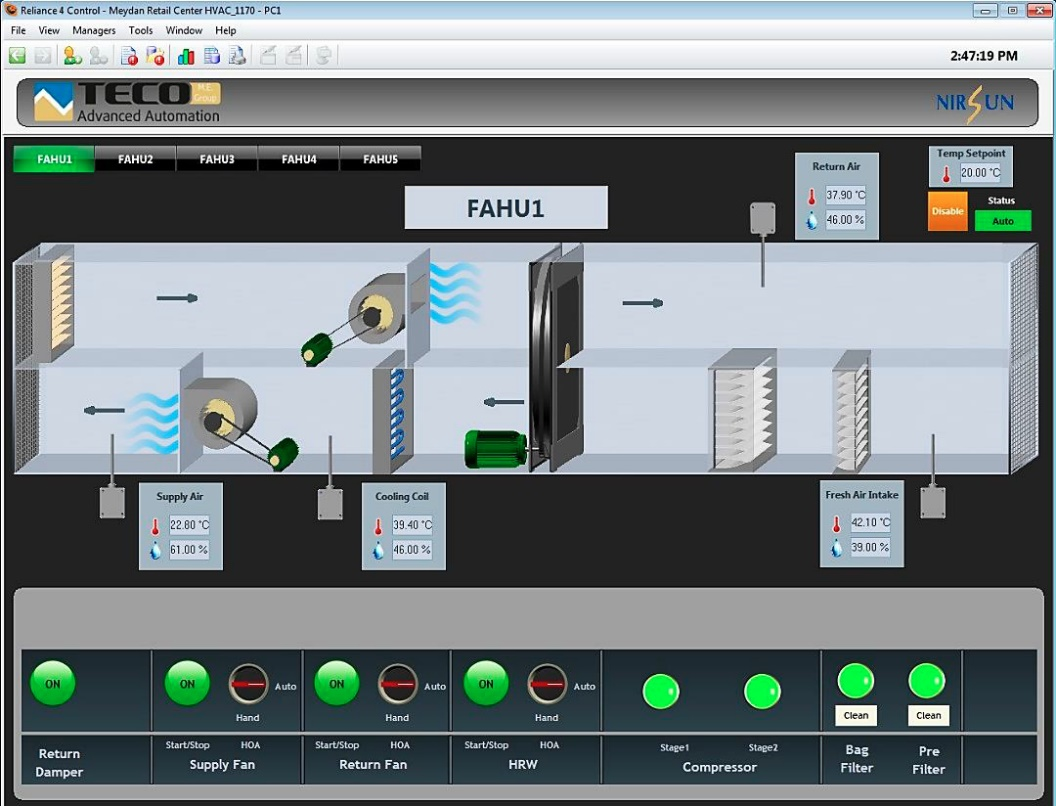 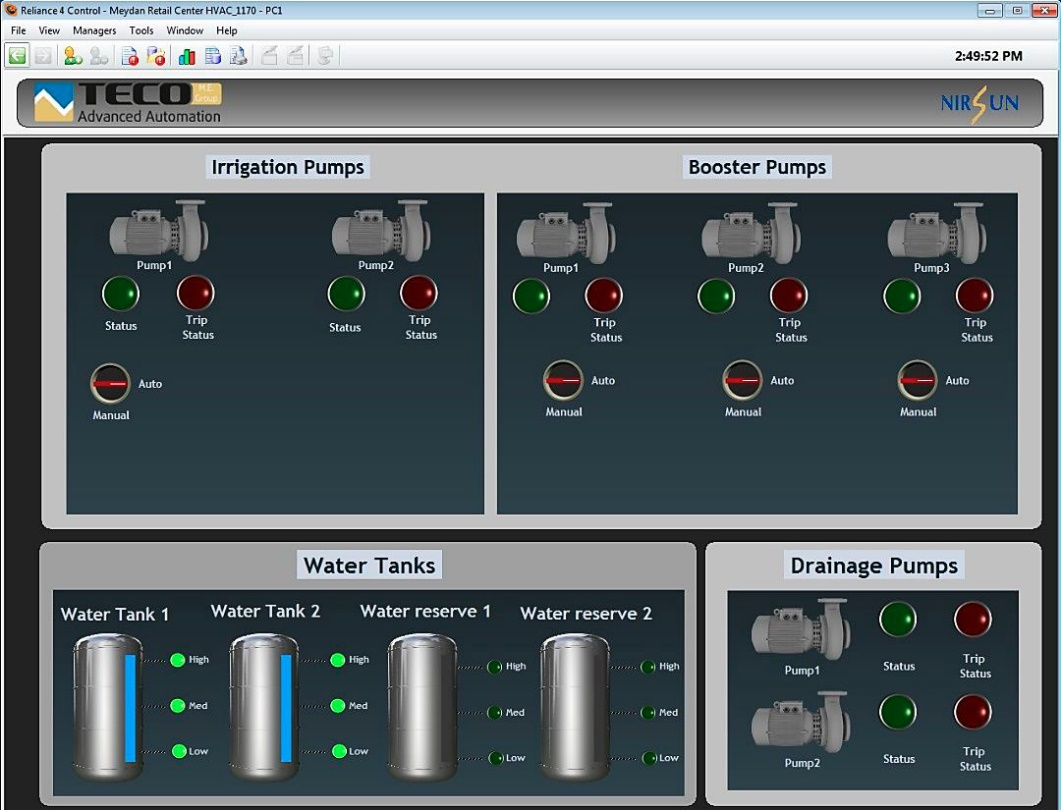 Visualization of the retail center's pumps and water tanks 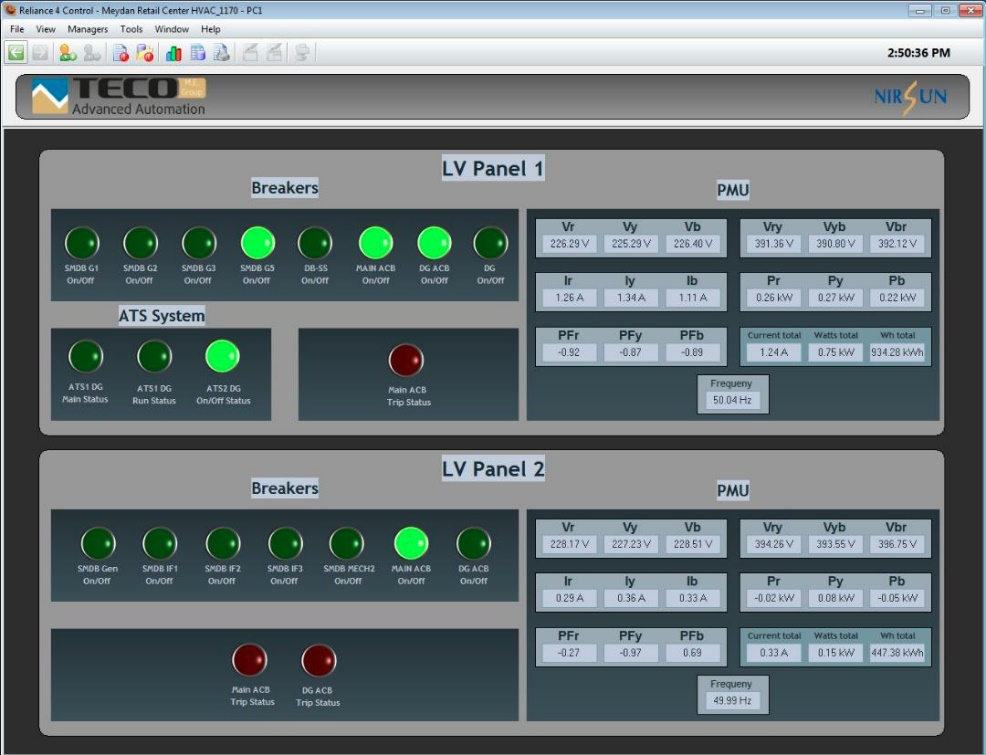 Visualization of the electrical system 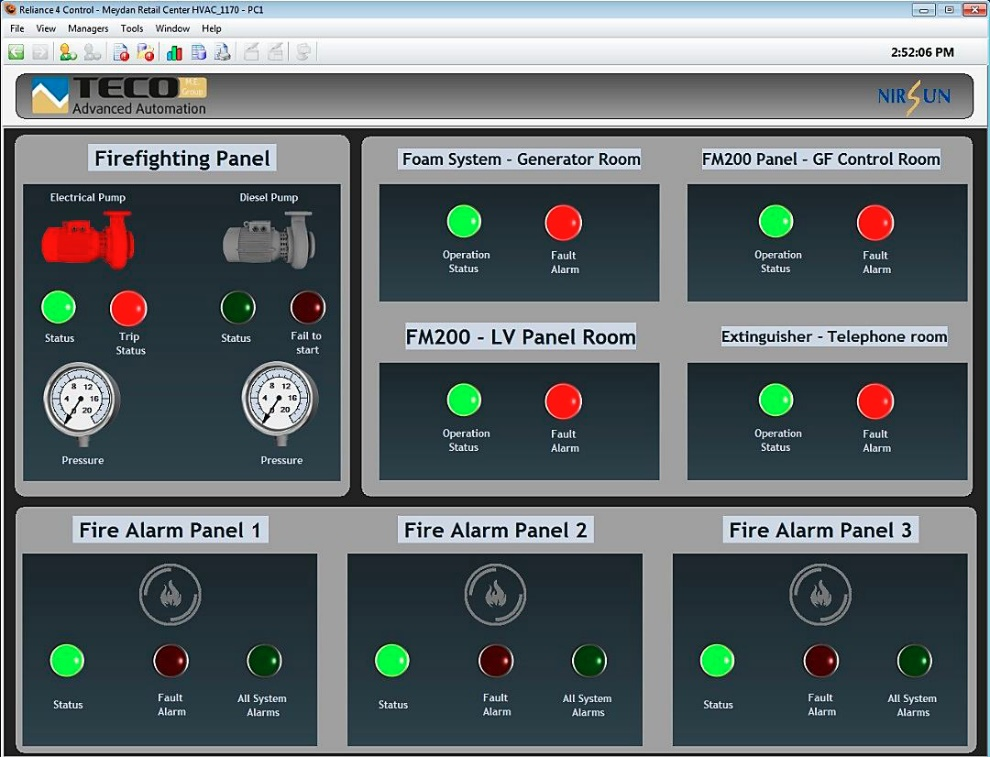 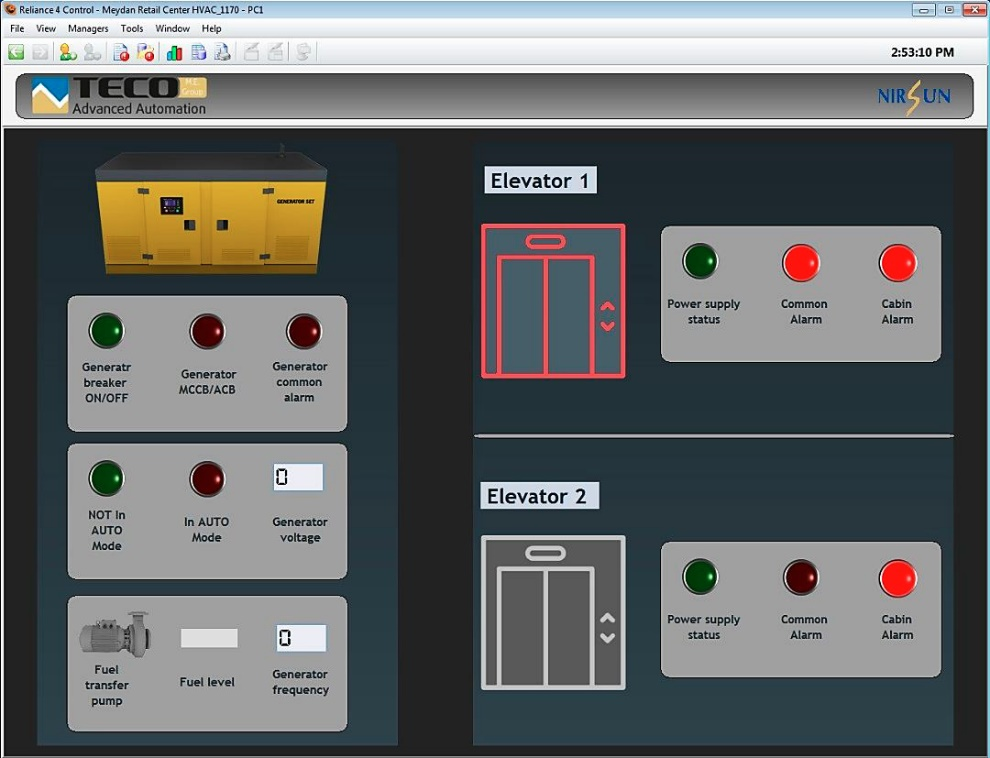 Visualization of the generator and elevators 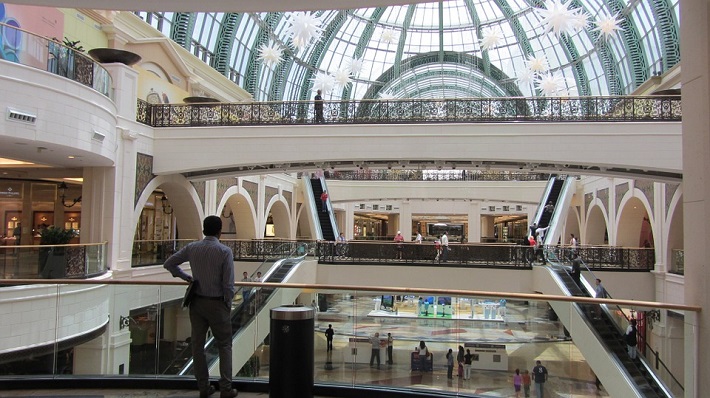 Title
Visualization and control of Meydan Retail Centre in Dubai