Visualization and control of the HVAC system at the Moscow International Business Center's Northern Tower, Russia

The Moscow International Business Center (Moscow-City) is one of the world's largest business district projects with over 3.5 million meters of floor area. The IBC will be one of the largest, tallest, and densest skyscraper clusters in Europe. The project is intended to be the core of the future modern center of Moscow. The $10-billion Moscow-City complex of offices, hotels, apartments, restaurants, shops, and entertainment centers will have about 25 high-rises, including at least seven buildings taller than any other now existing in Europe. The business center is expected to be completed in 2015. 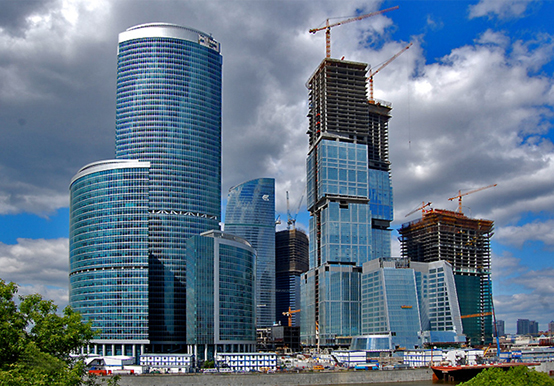 A picture of the Moscow-City construction site

The Russia Tower was a proposed skyscraper to be part of the business center. Its construction began in 2007, but has never been completed. Due to the global economic downturn, the project was officially canceled in June 2009. With its height of 612 m and 118 floors, the tower would have ranked among the world's tallest buildings. It was intended to look like a slender and tall pyramid that would achieve maximum stability with minimum structure allowing the most effective distribution of space. The higher floors with residential and hotel accommodation were designed as a series of modular units that could be configured individually. At the summit, a public viewing deck with cafes and bars would have created an attraction for visitors and residents, while an ice-rink and shops would have added to life at street level. The tower's slender profile was designed to create shallow floor plates that would maximize daylight penetration and increase the potential for natural ventilation. The triple-glazed, high-performance facade was intended to reduce heat loss, energy recycling was planned to reduce heating demand by 20 percent, and snow and rain water harvesting was expected to cut fresh water consumption for toilets by a third. Thus, socially and environmentally, the Russia Tower would have offered a sustainable new solution to contemporary living. 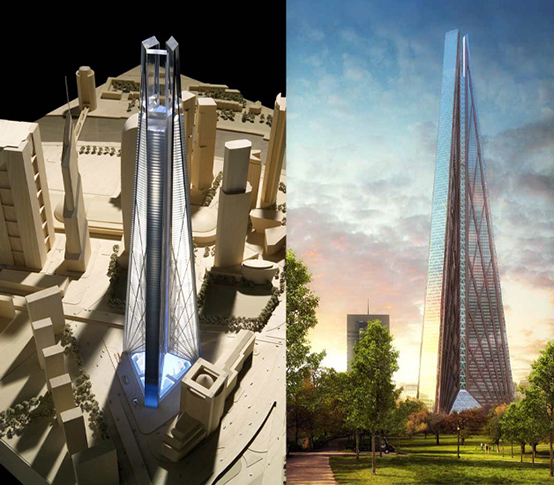 A model and visualization of the Russia Tower

When the project was canceled, it was proposed to use the land for building a parking lot and several smaller buildings.

The Northern Tower is an A class office complex located in the Moscow International Business Center. The Northern Tower is the residence of the world's famous companies such as General Electric, IBM, Eli Lilly, P&G, Lucent Technologies, Bunge and Nortel. The building has excellent natural light, large atrium and panoramic elevators. The complete building is equipped with furniture made of high-quality materials. Perfect heating and air-conditioning is provided by 204 HVAC systems. The building is also equipped with a multi-level parking system for 688 car spaces. The visitors can relax in the swimming pool, fitness center, cafeteria, bar or in the restaurant. The building has its own conference hall and bank branch with ATM machines. The Northern Tower has 27 storeys. Its construction began in 2004 and finished in 2007. The Northern Tower was designed by Project Institute 2 and developed by Strabag AG. The owner of the building is Severstal Trans. 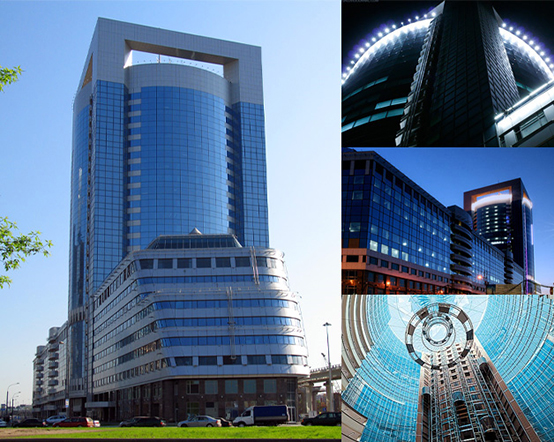 During the years 2006 through 2008, a new HVAC control system was implemented by the Slovak company Sauter Building Control Slovakia. The HVAC is controlled by Sauter EY3600 PLCs. The fire dampers are controlled by DI modules manufactured by ICP CON. The following systems are also monitored and controlled:

The control system is composed of three parts. Each part has its own communication bus for reliable communication with the control rooms. The first part provides control of the air-condition units, heat exchanger stations, cooling units and lighting.


The second part provides control of the fire ventilators and fire sprinklers. In order to achieve high data reliability, the second part is separated from the line that is used for communication with air-conditioning controllers. The fire ventilators are controlled by PLCs with a fire matrix. The whole building is divided into several fire zones that are automatically controlled by the electronic fire system. The first two parts communicate over the NovaNet serial bus. The control rooms are equipped with NovaNet/Ethernet converters.


The third part provides control of the fire dampers using I-7053 digital input modules. Communication with these modules takes place over a RS485 serial line and the data wiring is connected to a RS485/Ethernet data converter. 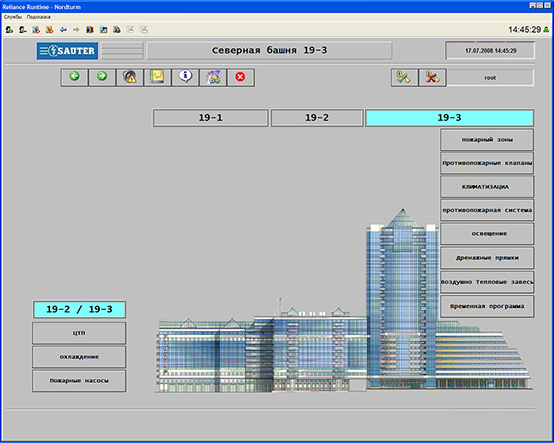 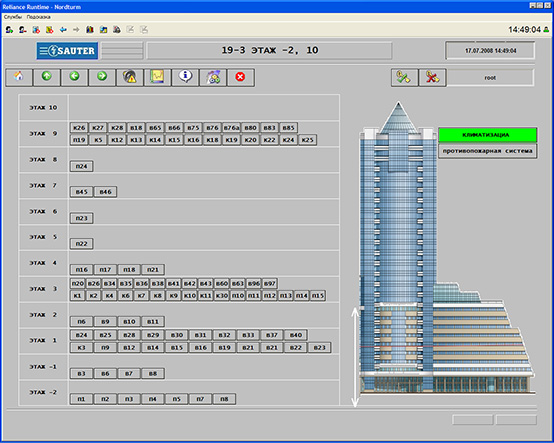 Visualization of the air-conditioning system – the main menu 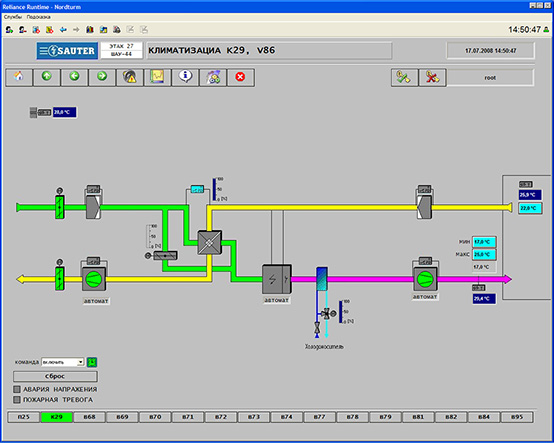 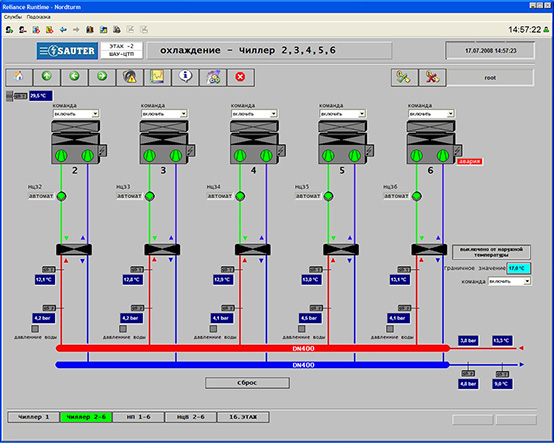 Visualization of the cooling system 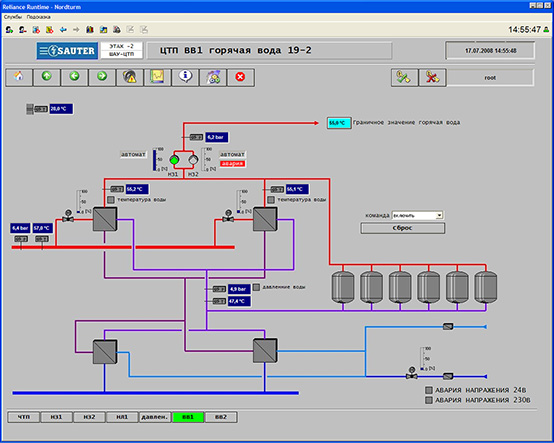 Visualization of the hot water system 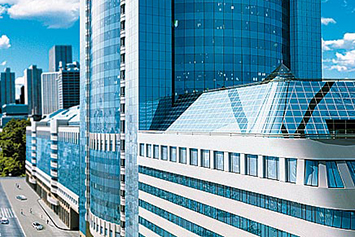