Navigation: Success stories > HVAC Systems > Visualization and control of the heat exchanger at Vagner Department Store in the city of Brno

Vagner Department Store is a well-known shopping center in Brno with more than hundred years of tradition. The department store was established by the Vagner brothers in 1907. The company started with the retail sale of stationery and grocery products. One year later, the Vagner brothers extended their business activities by starting the retail sale of furniture. In 1927, they bought a new building at 18 Ceska Street in Brno. The building was reconstructed and named as Vagner Department Store.


In 1948, the department store was nationalized. The building was returned to the heirs of the Vagner brothers in 1991. One year later, Vagner Department Store was completely reconstructed and reopened.

In 2008, a new heat exchanger was installed in the building. The heat exchanger processes are controlled by a Tecomat PLC (Foxtrot CP-1005) fitted in the control cabinet. The visualization of the heating and air-conditioning processes is provided by the Reliance SCADA/HMI system, which is installed on the control computer. The whole project was carried out by two companies – ActivHouse (the exchanger equipment contractor) and S&V ProIB (the control and visualization systems contractor).


The Reliance system is responsible for the control and monitoring of:

Authorized operators can even view or control the heat exchanger processes using Reliance 4 Web Client installed on any remote computer or notebook connected to the Internet. On top of that, important alarms/events can be sent to the operators' cell phones as text messages. 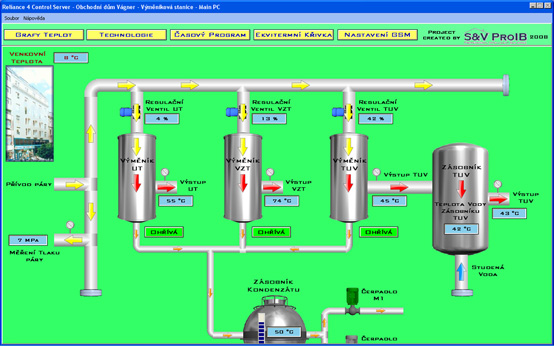 Visualization of the water heating process 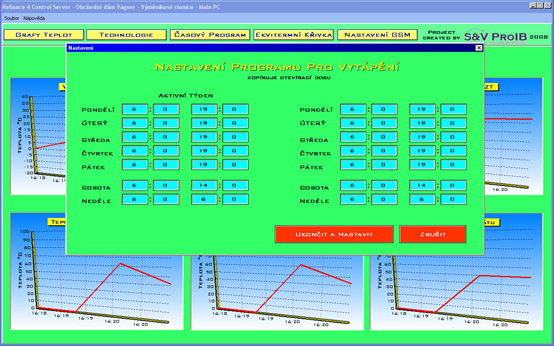 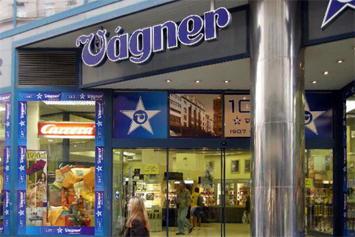