Navigation: Success stories > Heating Industry > Visualization and control of the straw-burning boiler in the spa town of Bechyne

In 2010, the reconstruction of the central boiler room was successfully completed in the spa town of Bechyne. It included installing a 2,500kW biomass (corn straw) hot-water boiler and two storage tanks and building associated storage areas.


To control and monitor the industrial processes, Tecomat PLCs and the Reliance SCADA/HMI system are used. An integrated surveillance camera system was also installed. The Reliance system is prepared to integrate the existing exchange station network with Johnson Controls systems.

A stand-alone modular Tecomat Foxtrot CP-1004 control system is used to control the boiler and the processes of combustion and deashing. Another Tecomat Foxtrot CP-1004 is used to control the output temperature of the heating water (heat accumulation). This PLC handles storing and utilizing the storage tank heat, controls the output temperature, the heat pipeline flow rate, ventilation, and the combustion air intake.


A separate PLC is used to control the delivery and introduction of fuel into the boiler. Data transfer between the fuel delivery and the boiler control is based on I/O modules.

The main control room is equipped with one control PC and a 24" LCD monitor. The Reliance 4 SCADA/HMI system, which communicates with the Tecomat Foxtrot CP-1004 PLCs via Ethernet, was installed to visualize the boiler room.


Thanks to several well-arranged visualization screens, the operating personnel can view and control the following processes: 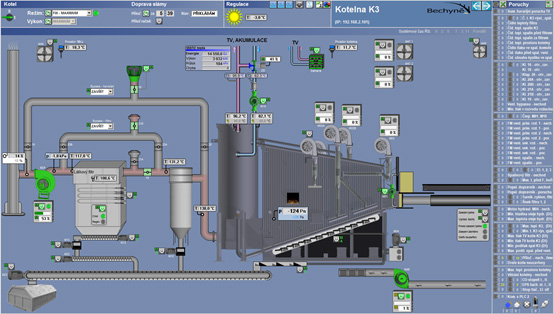 Visualization of the straw-burning process 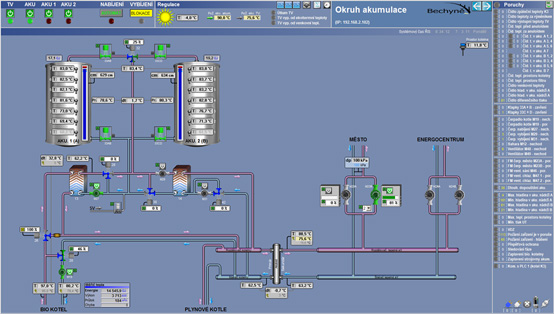 Visualization of the water-heating process 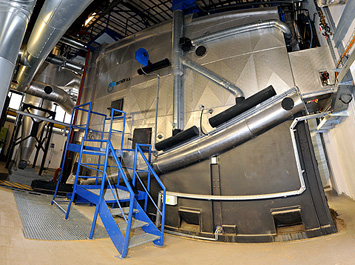