Navigation: Success stories > Food-Processing Industry > Visualization and control of chicken meat processing at the PROMT company's plant in the town of Modrice

The control system consists of one Tecomat TC700 PLC and one control computer. In the remote switch room, there is a control cabinet equipped with the Tecomat TC700 PLC, power circuits, and drive control circuits. Communication with the control computer is provided over an RS-232 serial line. The Reliance SCADA/HMI system was chosen for the reliable control and visualization of all production processes. Each particular system or production process can be displayed on the control computer's monitor. For example, the operators can control conveyor lines, set up drive parameters, or control the poultry cutting machine. Data from the processes is stored in Reliance's database for further analysis.


The control system was also equipped with an operator panel supplied by the Exor company. This panel is designed for use as a backup control system. This means that the production line can be controlled from this operator panel in the event of a failure of the main control computer. 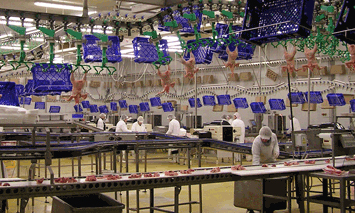