Visualization and control of the alkali-acid, chromium, and cyanide wastewater neutralization process

MEP Postrelmov is one of the oldest plants with electrical production in North Moravia. In 1931, the company began the production of low voltage devices, starting circuit-breakers, resistors, and airport and railroad signal lights. During World War II, it produced low voltage devices for the German Army. In 1948, three years after World War II, the MEP company was nationalized and joined to the MEZ Postrelmov national enterprise.


Today, MEP Postrelmov produces electric devices and power distribution cabinets, which are used in electric transportation, power supply, and engineering. In addition, the company produces parts and kits for devices used in the engineering industry and cast products from aluminum. MEP Postrelmov also provides the surface finishing of metals.

The company has its own electroplating plant with a disposal facility where chemicals from electroplating are neutralized. In 2007, the management of the MEP Postrelmov company decided to install a new system for the control of the alkali-acid, chromium, and cyanide wastewater neutralization process. The main reasons for the implementation of the new control system were the optimization of the production processes and minimization of human errors. The complete reconstruction, including the implementation of the new SCADA-based control system, was provided by AITEC. Thanks to the installation of the new control system, the disposal facility provides 24/7 operation and its output has been increased to 16 m³ per hour.


All pipelines were provided with servo-operated valves and reaction and sedimentation tanks were provided with the system for the continuous measurement of tank levels. In addition, the disposal facility was provided with the system used for the automatic dosing of chemicals. Brand new devices for the automatic measurement of pH and redox were installed in the chemical reactors as well. Thanks to the installation of the new pH adjustment system and ion exchanger, it was possible to increase the flow performance of the entire disposal facility.


The SCADA-based control system consists of a control cabinet fitted with a Tecomat TC700 PLC. Communication is provided over the RS232 bus and over Ethernet. The new control system also enables the control of all systems and cleaning procedures of the disposal facility.


The visualization project on the computer in the lab only provides the supervision of the cleaning processes. This computer communicates with and obtains data from the operator panel over the local network (LAN). The control system also provides log and archive changes of the cleaning processes to the database. This is a very good feature for further analysis or supervision.


By the implementation of the new SCADA-based control system with Reliance, better quality of processed water flowing to the sewer system was achieved. 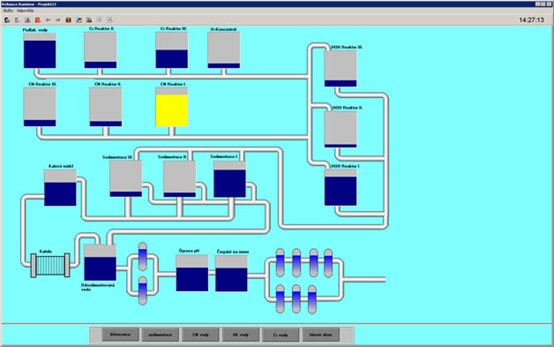 Visualization of the electroplating process – picture 1 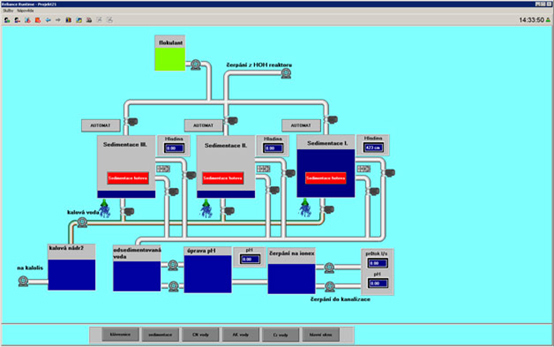 Visualization of the electroplating process – picture 2 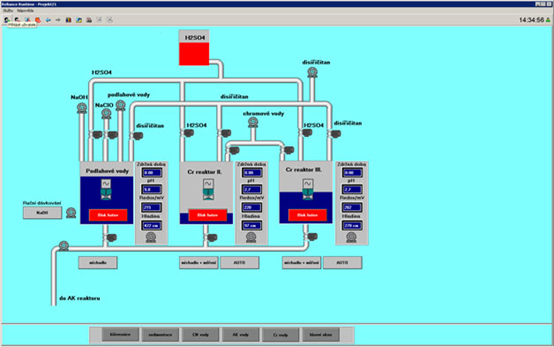 Visualization of the electroplating process – picture 3 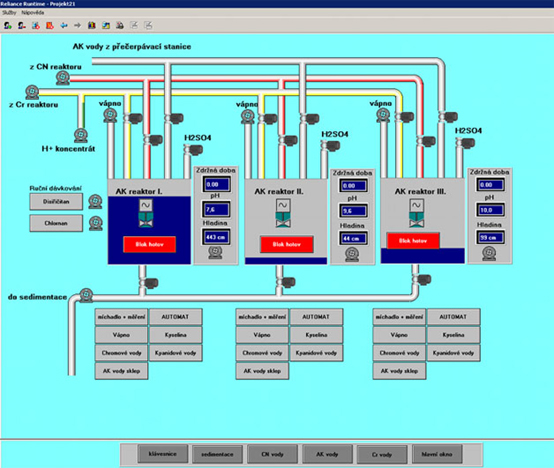 Visualization of the electroplating process – picture 4 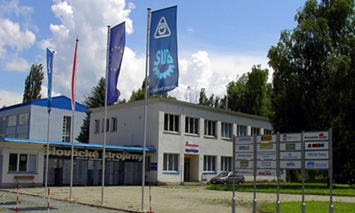 Title
Visualization and control of the alkali-acid, chromium, and cyanide wastewater neutralization process