This article focuses on a modern method of creating impressive three-dimensional visualizations in a short space of time without having to make complicated models.


You must have come across this: the visualization of any process looks as good as its author is skillful and proficient in graphic design. Many years ago, visualizations were done in a simplistic, flat, and plain style. Later, however, the advent of more powerful computers and higher-quality graphics software corresponded to the higher-quality visualizations created with SCADA systems. Realistic models of tanks, pipes, machines, and devices made with three-dimensional modeling tools began to be used in diagrams. The resulting visualization then became more attractive and was thus closer to real technological equipment.


After that, to make the perfect visualization, some companies started modeling complete production lines and halls using 3D tools. Within the visualization, the model could be zoomed in, zoomed out, and rotated in any direction. The resulting application had the advantage of being almost perfectly authentic. This method of visualization does have its disadvantages, though. Any three-dimensional modeling is time-consuming and financially demanding. It must be performed – using special software – by an expert down to the last detail. If significant technological changes occur in the future, everything must be remodeled. Today's state-of-the-art graphics tools, however, allow doing it in a much faster and easier way.


GEOVAP is – in the Czech Republic – an exclusive representative of the German company NavVis GmbH, which is a developer and manufacturer of professional 3D indoor mapping solutions. This service is marketed under the trade name Indoor3D. NavVis M6 Indoor Mobile Mapping System is an indoor mobile mapping system equipped with six
high-resolution cameras, four laser lidars, and other sensors. It allows you to capture up to 20,000 square meters of area per day. Data (point clouds, 360° imagery) is stored on an SSD and then processed automatically. 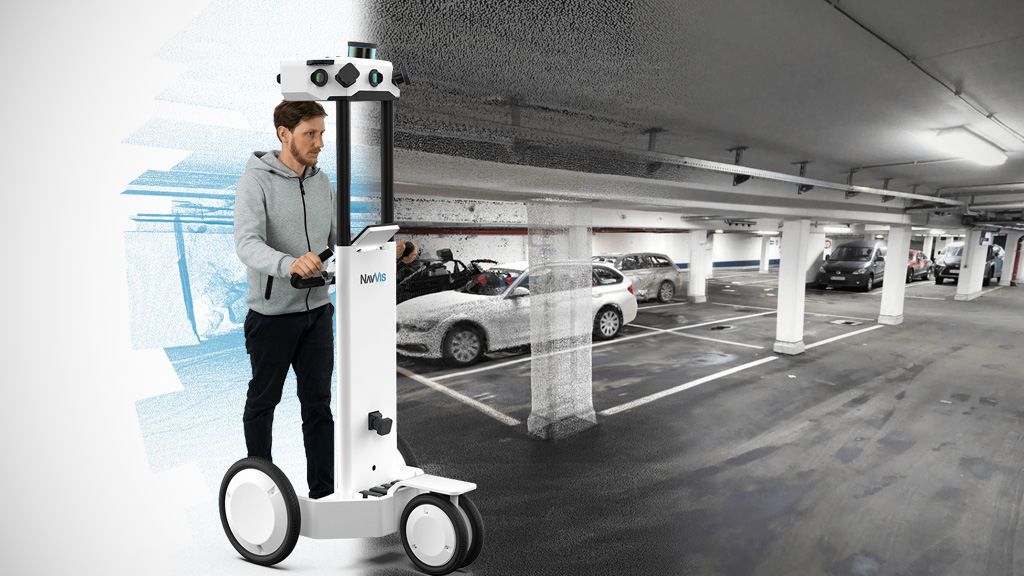 The result is a realistic 3D indoor model of a hallway or building capturing even the smallest details. You can walk through the interior in the same way as Google Street View is used. But this is not the end. It's the beginning! There are a large number of methods of use.


The so-called points of interest can be simply inserted in a three-dimensional model.


These points of interest can be displayed as icons on a map. To move within a point of interest, click on the icon it represents. A video, document, or website attached to a point of interest serve as a source of detailed information on the point. Thus, the 3D model allows creating any extensions used by various groups of workers (workflow management). After logging on to the system, you can display only those points of interest within the interior to which you have access and in which you're interested. 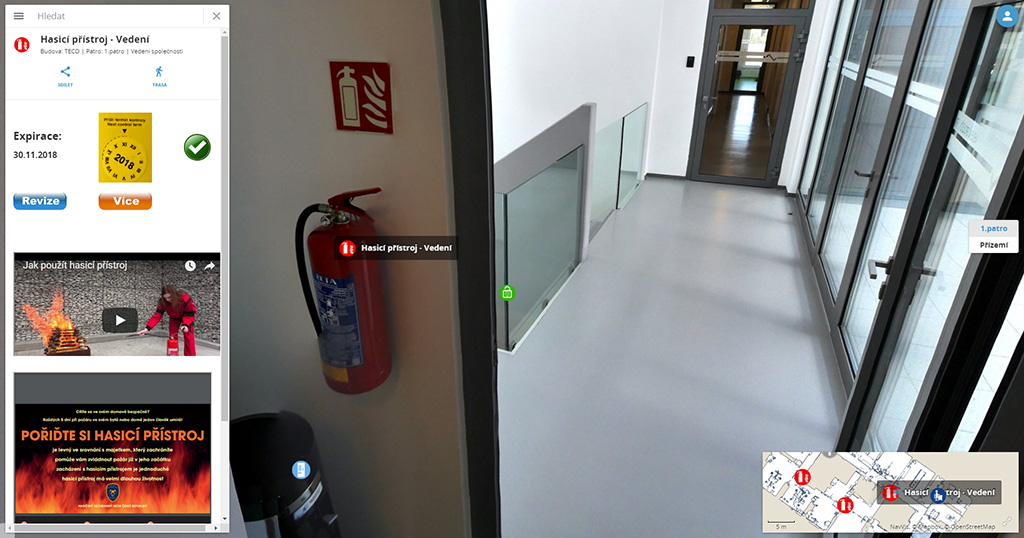 In a shopping mall, for example, the stores' points of interest are displayed to customers, thus allowing them to learn about special offers, opening hours, or to directly buy goods from a seller over the Internet. If, however, the shopping mall's energy manager is logged on to the system, commercial offers are no longer displayed. Instead, each store's consumption (electricity, water, heat) appears, including any other points of interest important to the manager.

What is important and what we want to emphasize is that points of interest can also be dynamic. Any sensors' live data can be attached to the 3D model. In this way, you can display current temperatures, pressures, flows, relative humidities, CO2 concentrations, valve positions, states of meters, pumps, and any other sensors, including IoT. All this data can be linked from the Reliance SCADA system, which then gives the 3D model another level of user possibilities. After clicking a sensor, a historical trend of its measured values is displayed. 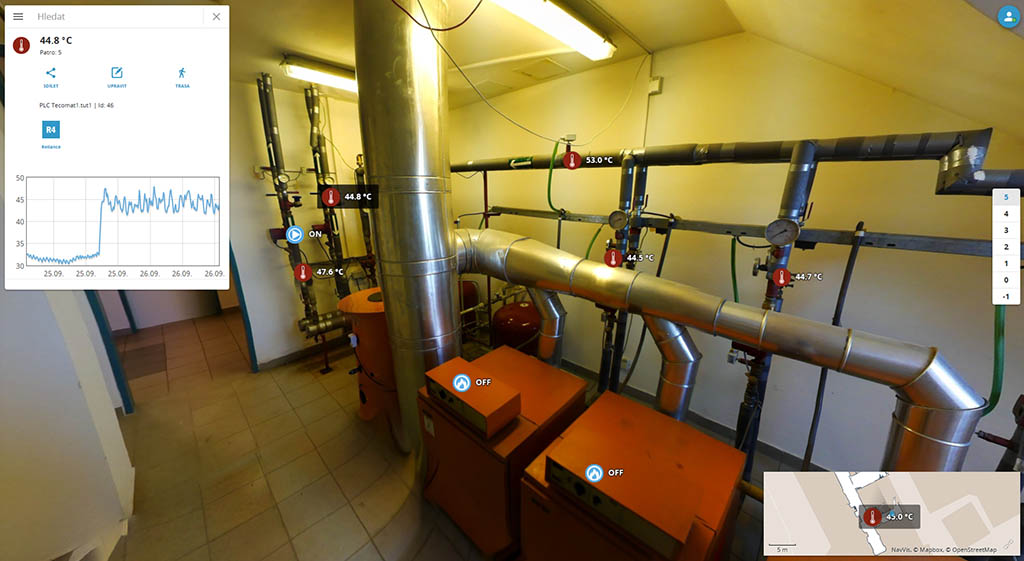 Where to use 3D mapping

The following features are also available


Indoor navigation is the icing on the cake. A mobile application available for Android and Apple has been designed for this purpose. The application allows simple navigation to any point of interest or to any room. It is suitable for use not only in large buildings like universities or civic buildings, but also in large complexes consisting of many individual buildings, such as manufacturing facilities. In these buildings, the system can navigate employees "from chair to chair". 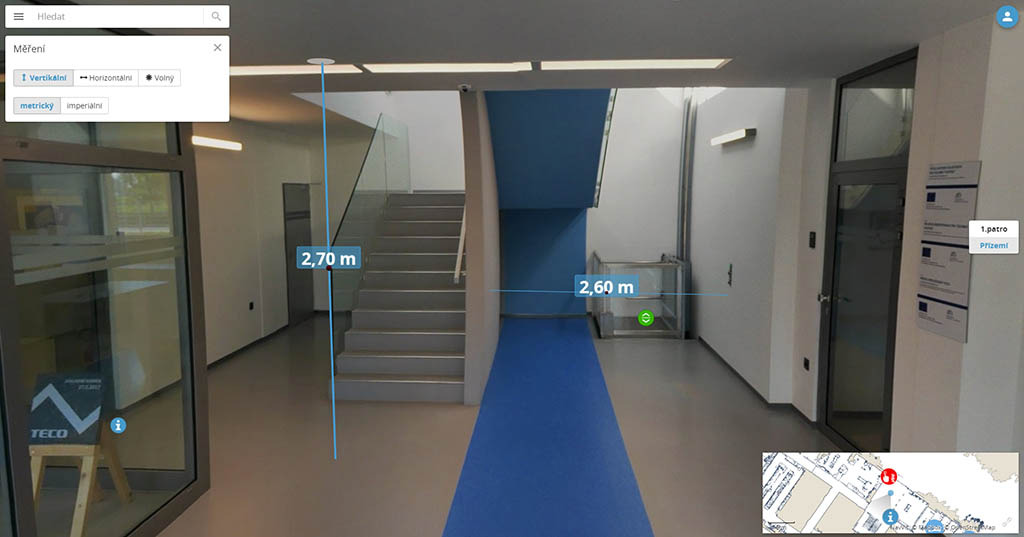 Perhaps you wonder what to do when the layout of the interior changes significantly. In such a case, you can easily and quickly resurvey the interior. The updated 3D model then replaces the original data. The points of interest you had created earlier no longer need to be inserted again. They stay in place, so model updates can be very fast with no extra work.


GEOVAP also has equipment for 3D outdoor laser mapping. By combining the two mapping methods, complete 3D models of buildings, facilities, or even cities can be created. Such a 3D model can serve as the foundation for both complete ERP systems and smart city projects. 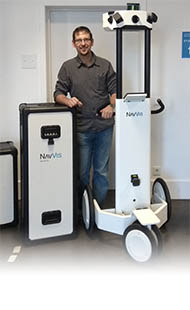