Navigation: Success stories > Other > Visualization and control of an irrigation control system for the Mandurah suburb in Perth, Western Australia

Visualization and control of an irrigation control system for the Mandurah suburb in Perth, Western Australia

For most of the year, the climate in Western Australia is hot and dry. Therefore, it requires local governments to provide irrigation systems to sports grounds and parks to keep them green. These complex systems are installed directly in the parks to efficiently irrigate the parks' greenery.


In 2011, the Australian company Waterman Irrigation, a member of IA-Group Pty Ltd., installed a new irrigation system at the City of Mandurah to control 18 parks. Mandurah is situated south of Perth, the capital city of Western Australia. It has a population of 74,000 and covers an area of 174 km².

The installation is unique in several aspects. The application has over 38,000 data points, more than 1,500 scripts, and 616 visualization windows allocated separately for the control room's PC and mobile clients. All the 18 parks are controlled by 18 physical PLCs and 54 virtual Modbus devices. Each PLC is connected to the central server through a virtual private network over a 3G Sierra Wireless router (HSPA/UMTS technology), which gives a total of 18 VPN tunnels. Waterman Irrigation's specialists had to cope with a large amount of data as 38,000 data points cannot be transferred online through a 3G mobile network. The initial data volume was about 10 GB per month per site, which was 180 GB for the whole system. This proved to be infeasible. The park caretakers monitor and control the irrigation using Reliance's mobile clients installed on 10 cell phones. For this reason, the system had to be optimized and data to be transferred only if any of the caretakers is connected to it. As soon as the user has navigated away from a PLC page, the data transfer is terminated automatically. This solution has greatly reduced the total volume of transferred data to less than 20 GB per month!


Thanks to the central software, the irrigation system is accessible 24/7. Evapotranspiration data from two weather stations located in the area is used to adjust the irrigation times.

A good example of the impact and importance of this system can be found in what happened last summer (December 2011 to February 2012). A citizen contacted the council during the night informing that the irrigation main pipe line at one of the parks was broken and a massive quantity of water was flooding the area. The complaint was immediately forwarded to the irrigation supervisor. Directly from his house, he connected to the Waterman Irrigation SCADA system via his laptop/PDA, confirmed the issue reading the pressure and flow data of each park, and suspended the irrigation program at the specific park, completely solving the issue. This was achieved in less than 10 minutes from the call. Without the SCADA system, the supervisor would have had to leave his house, drive to the local park, and manually switch the system off. This operation would have required at least two hours, during the night.

The control system consists of 18 programmable logic controllers equipped with Linux-based processors. Each PLC is connected to I/O modules via Ethernet and, via 3G wireless routers, to the central server using VPN connections. The server is loaded with the Reliance 4 Control Server software.


In Mandurah, each park has a pump for ground water and an irrigation controller to distribute the water to various sprinklers. The Waterman Irrigation Controller developed by Industrial Automation has the ability to control up to 100 solenoid valves per park and measure a variety of sensors, such as pressure, flow, or weather conditions.


The irrigation processes are visualized and controlled by the thin clients of the Reliance SCADA/HMI system (to be specific, Reliance 4 Mobile Client installed on the operating personnel's cell phones). Authorized persons can thus access the system 24/7 via their smartphones to monitor and control the irrigation in every park. 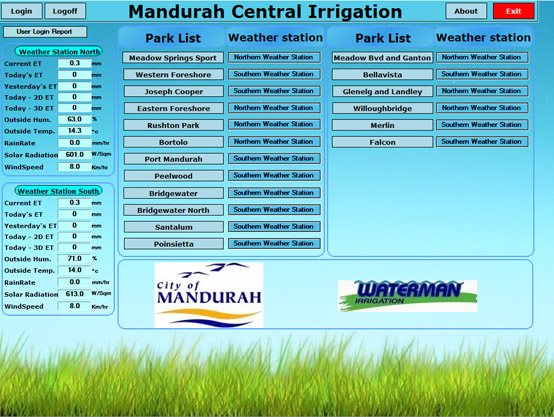 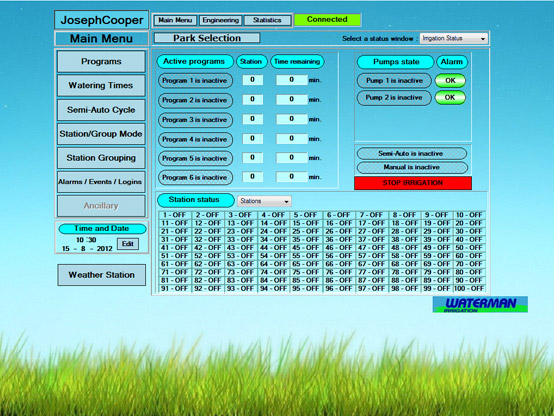 Visualization of the irrigation in Joseph Cooper Park 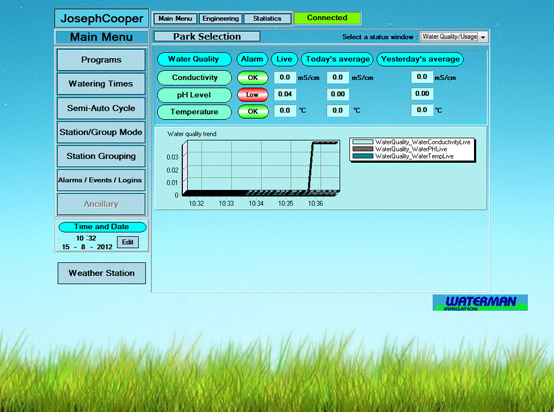 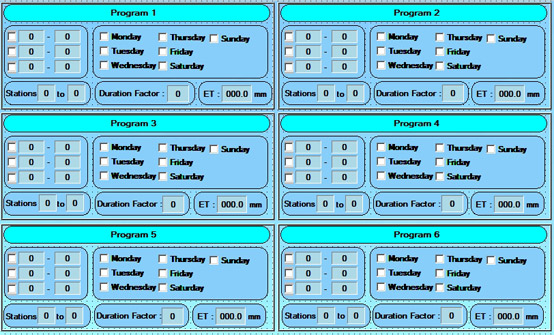 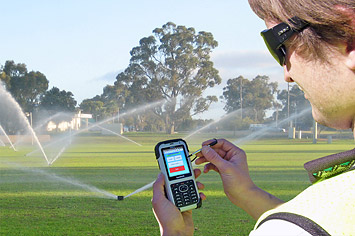 Title
Visualization and control of an irrigation control system for the Mandurah suburb in Perth, Western Australia